We've been very lucky to have such comfortable weather to work on the bus. However, it's been warming up quite a bit and will be hot, muggy Florida Summer soon enough, so we've started preparing. This involves insulating the ceiling and walls as best as we can and researching the best air conditioner for the space.

We had some rain this week which was nice for the plants but no so nice for our freshly painted floors. Winston and Willow managed to leave their muddy paw marks all over one morning as I caulked the windows. They quickly lost their fear of the bus and will frequently lounge underneath it or play, running in circles around it as we work.


My dad pointed out that the silicone we used to fill the holes in the metal floor of the bus isn't paintable. I'm not sure what we plan to do to the metal around the windows but I didn't want to rule out painting it so we picked up some paintable silicone to replace the old caulk that I scraped out last week. 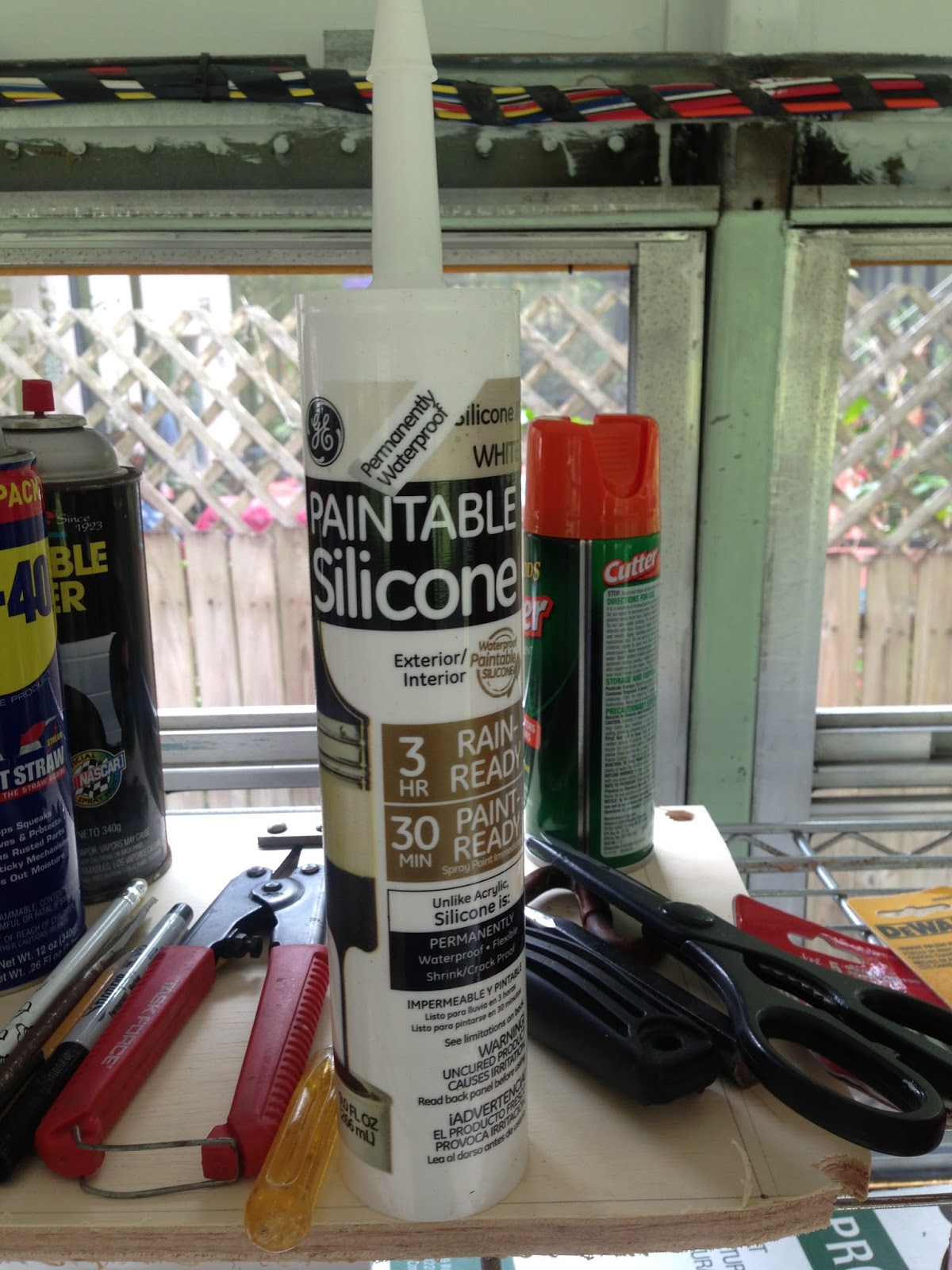 First I used painters tape around each window to make clean lines for the caulk to  go. 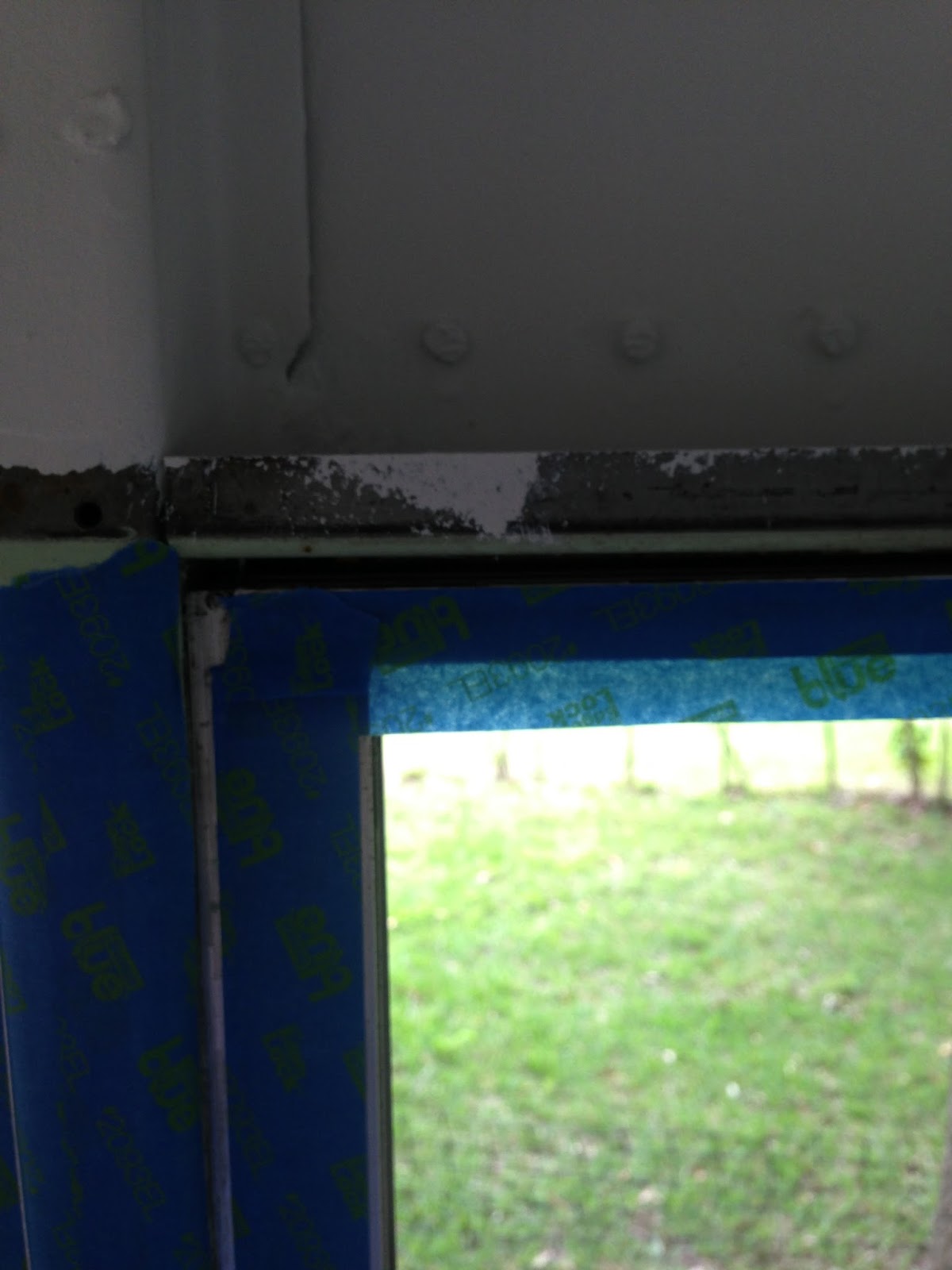 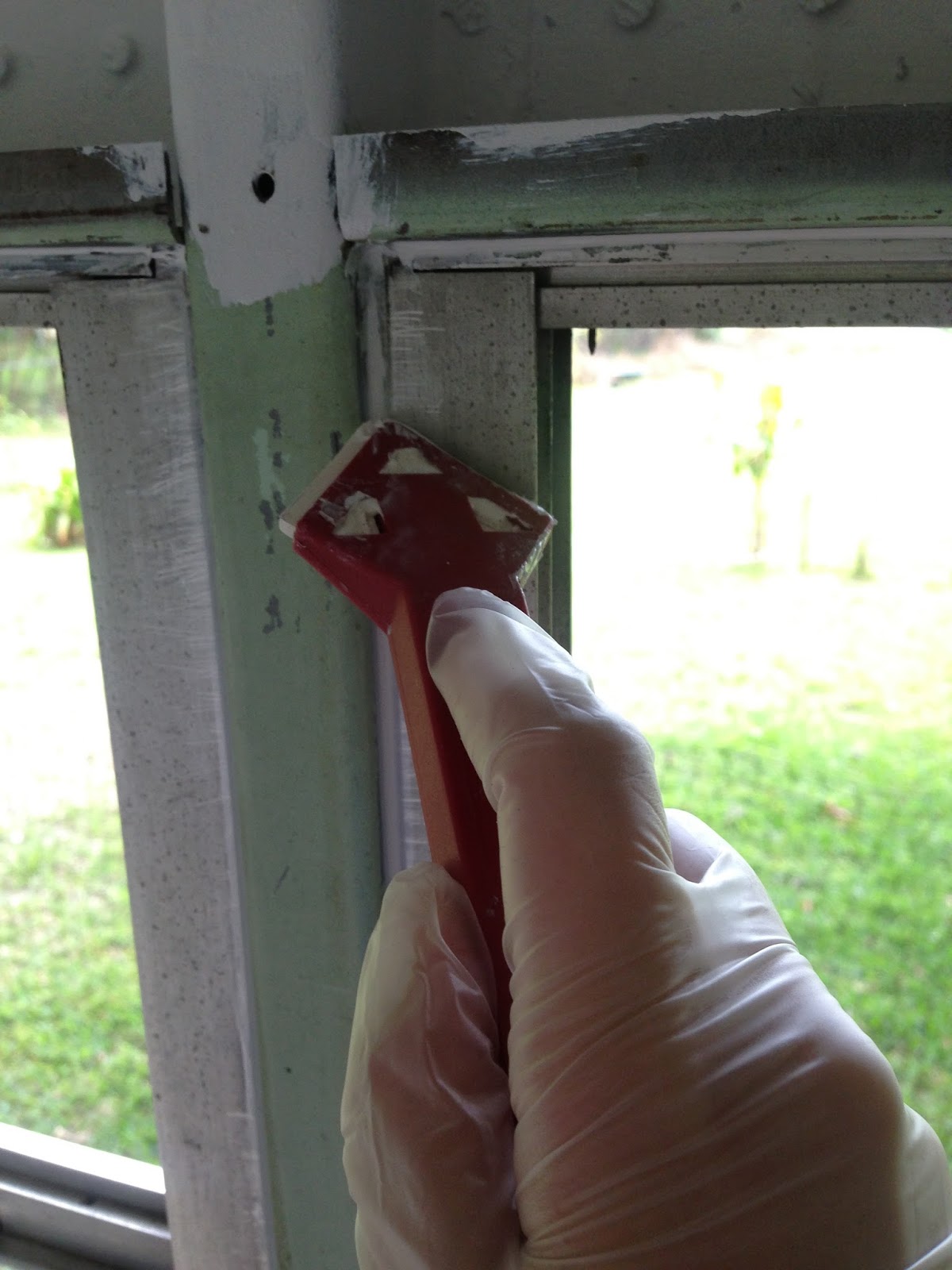 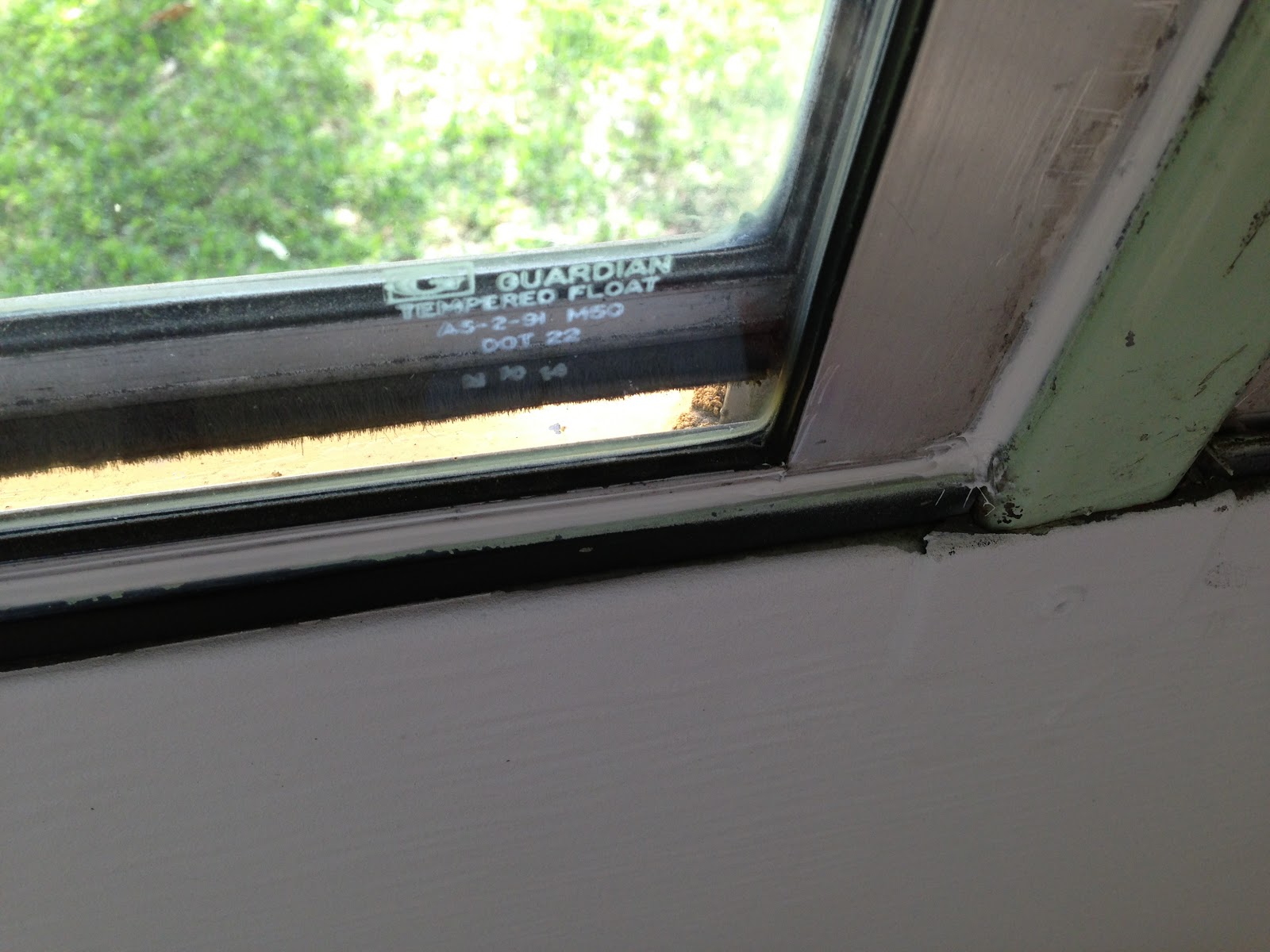 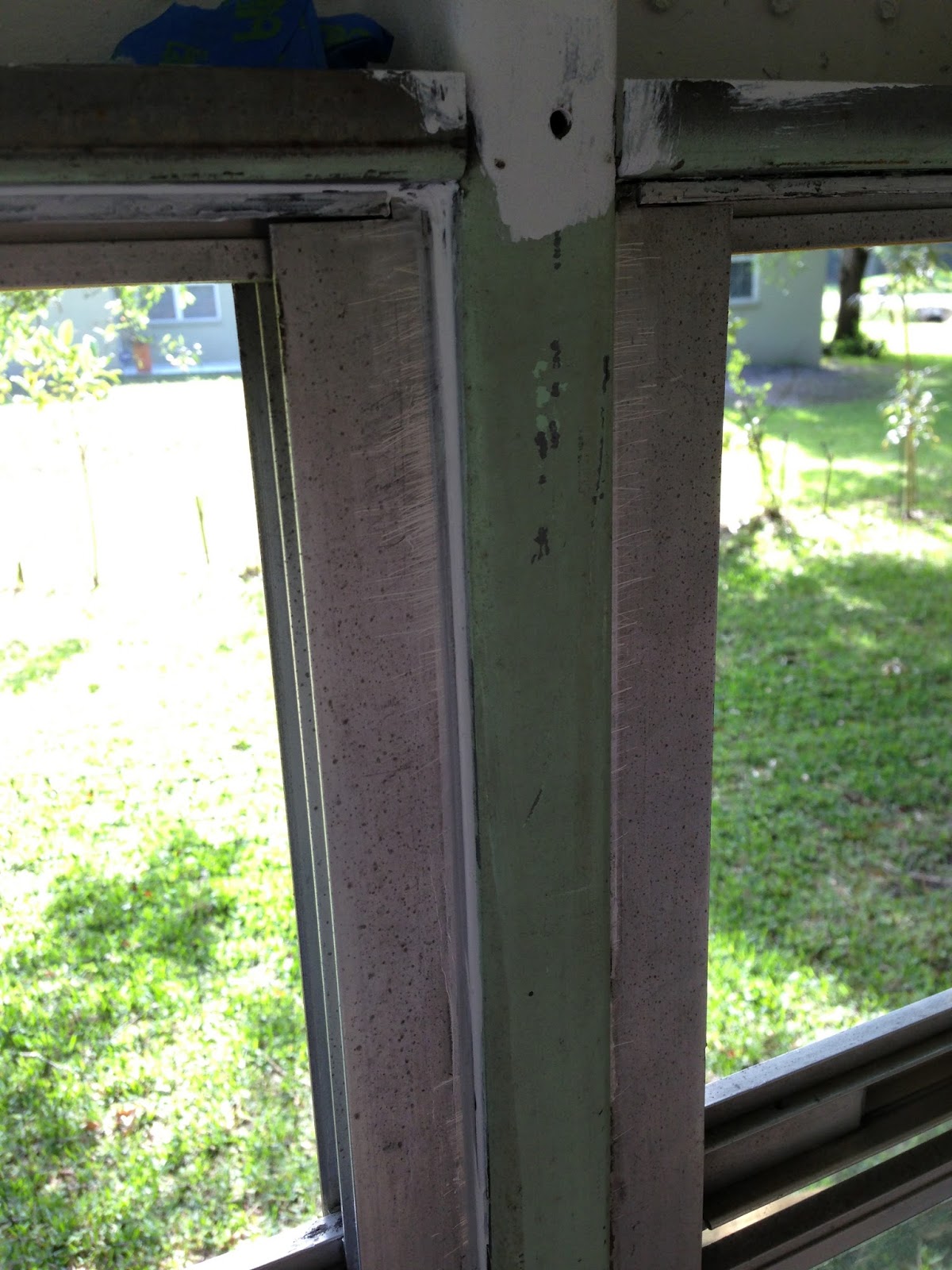 We also got some gaps and cracks insulating spray to seal up some of the beams and add some insulation to the corners of the roof. 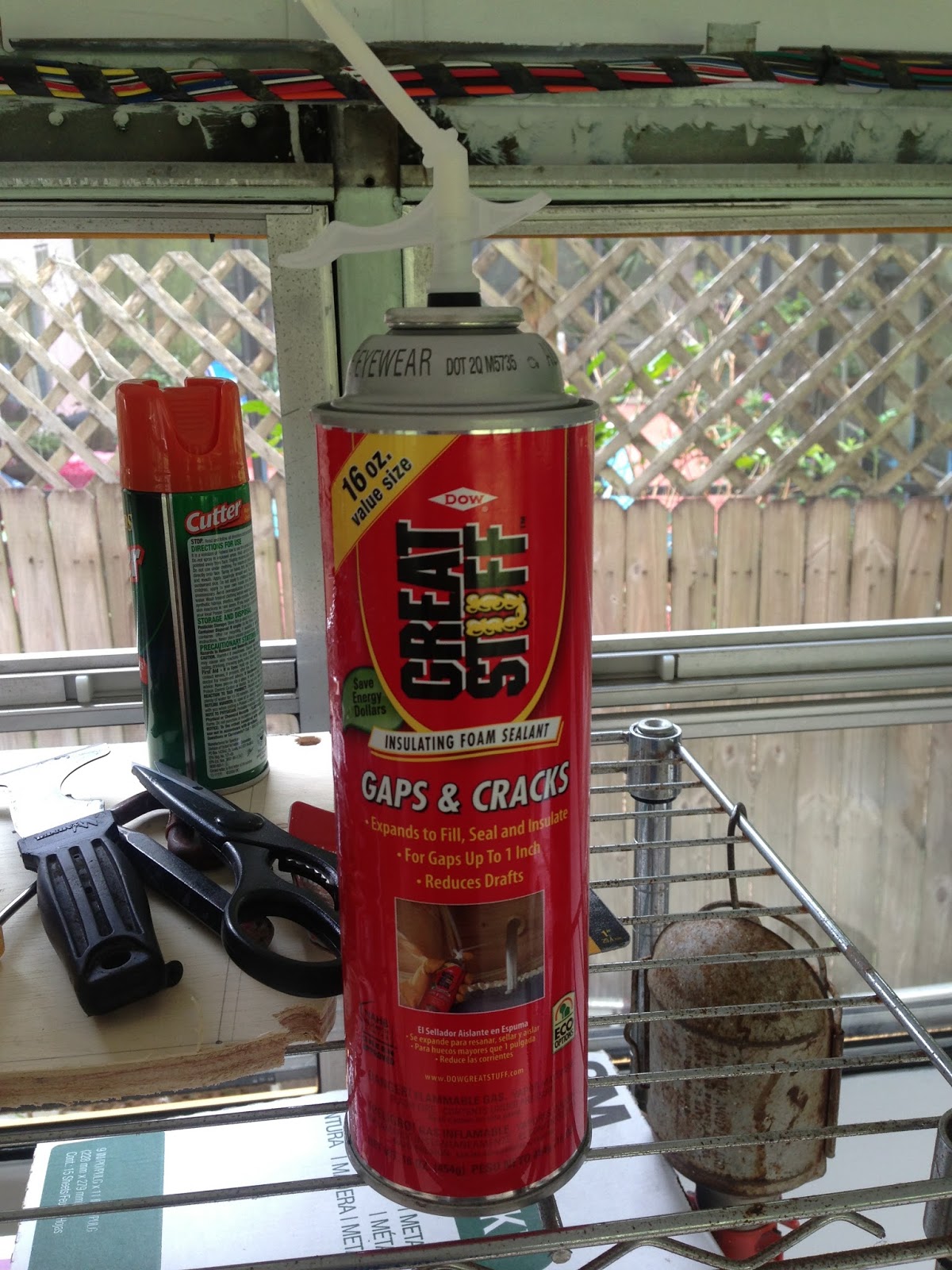 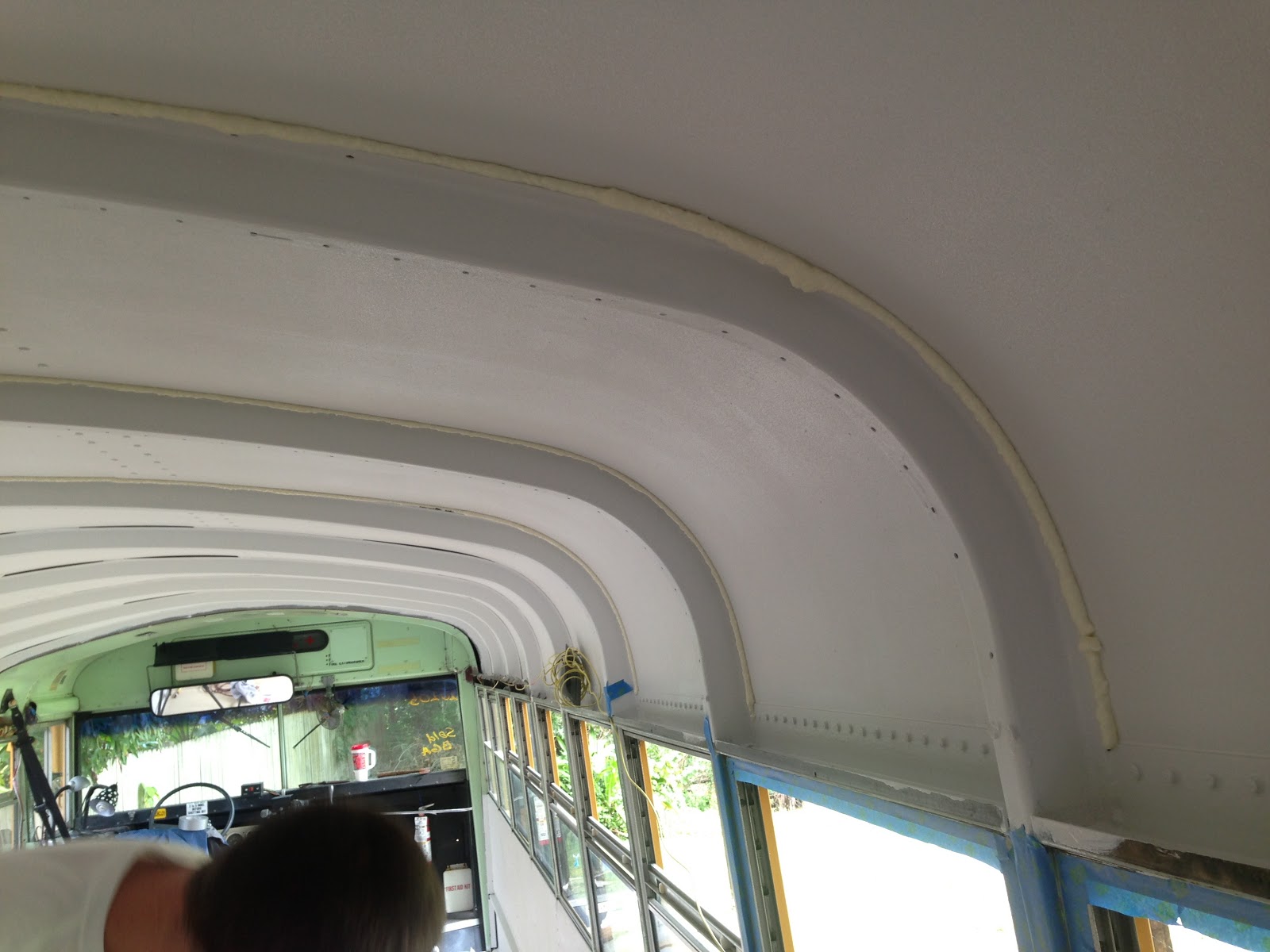 Before we reinstalled the roof panels we gave them a good scrub. 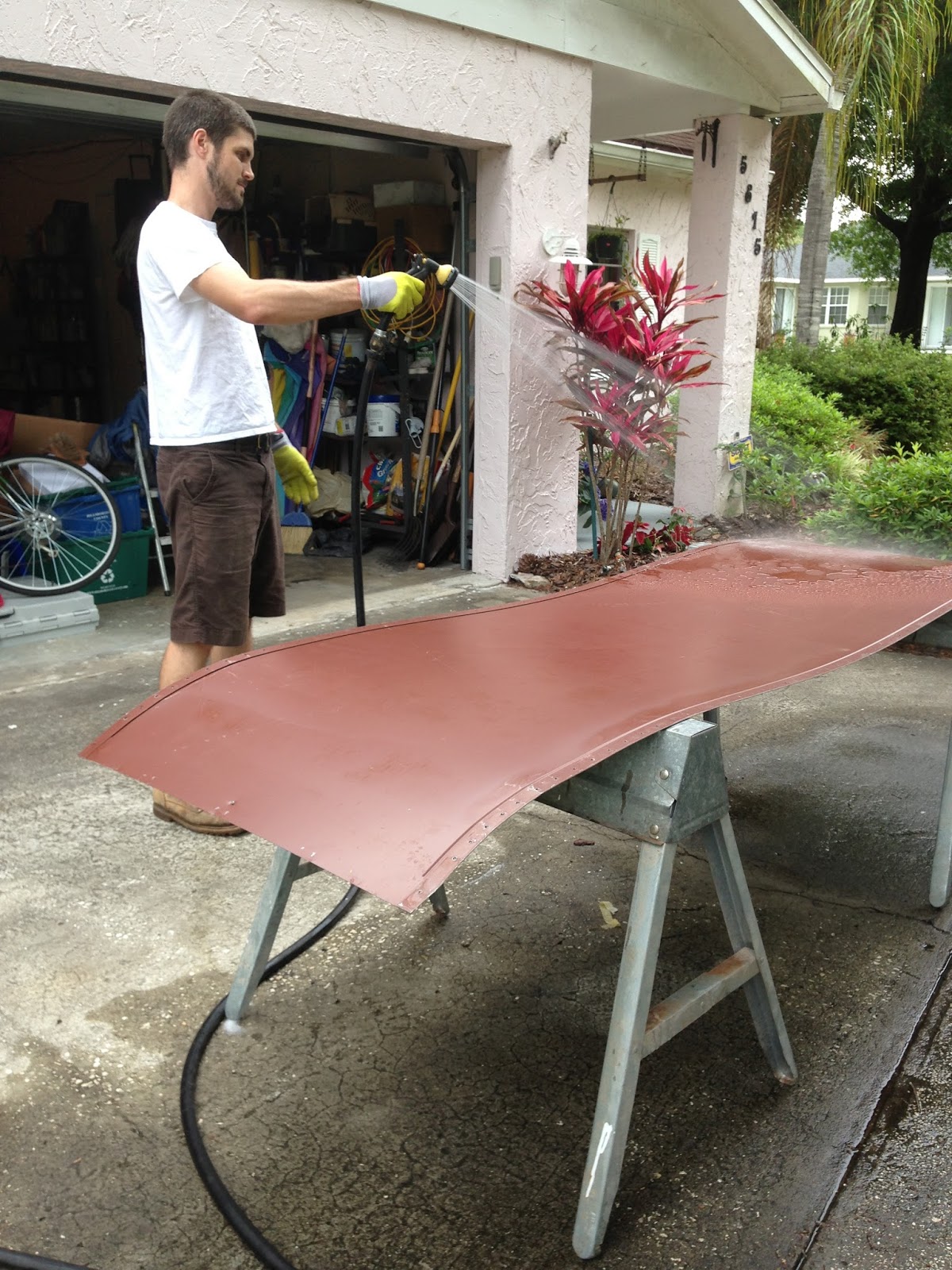 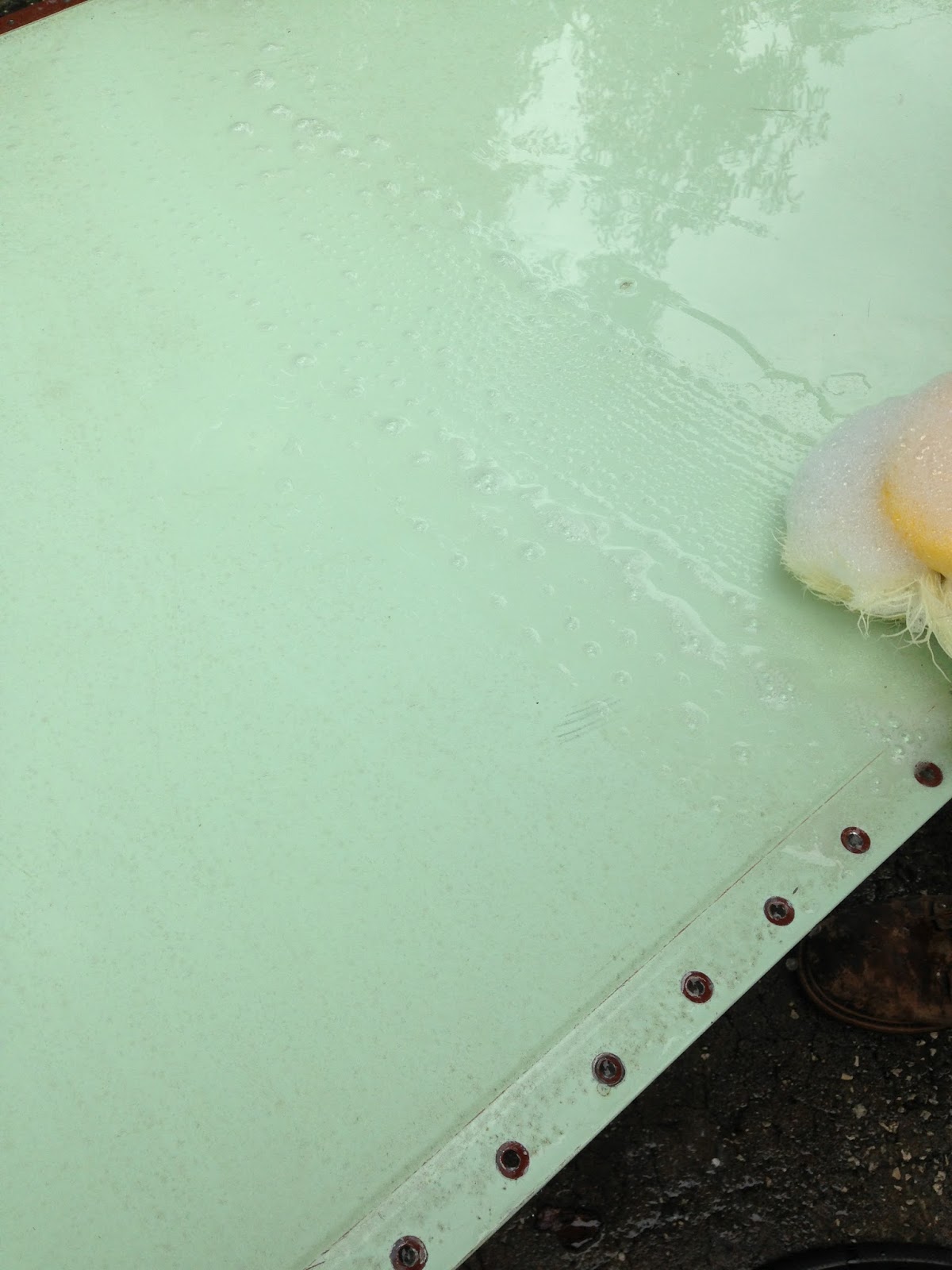 They didn't seem that dirty until we put the first one up and saw it next to one that we weren't able to take down and scrub because it was attached to the roof via the seat belt.


Next we prepared to install the insulation. When we were taking the old insulation out of the bus I was covered in it for days and it was so itchy! This time I prepared with a rain jacket, hood, and gloves. 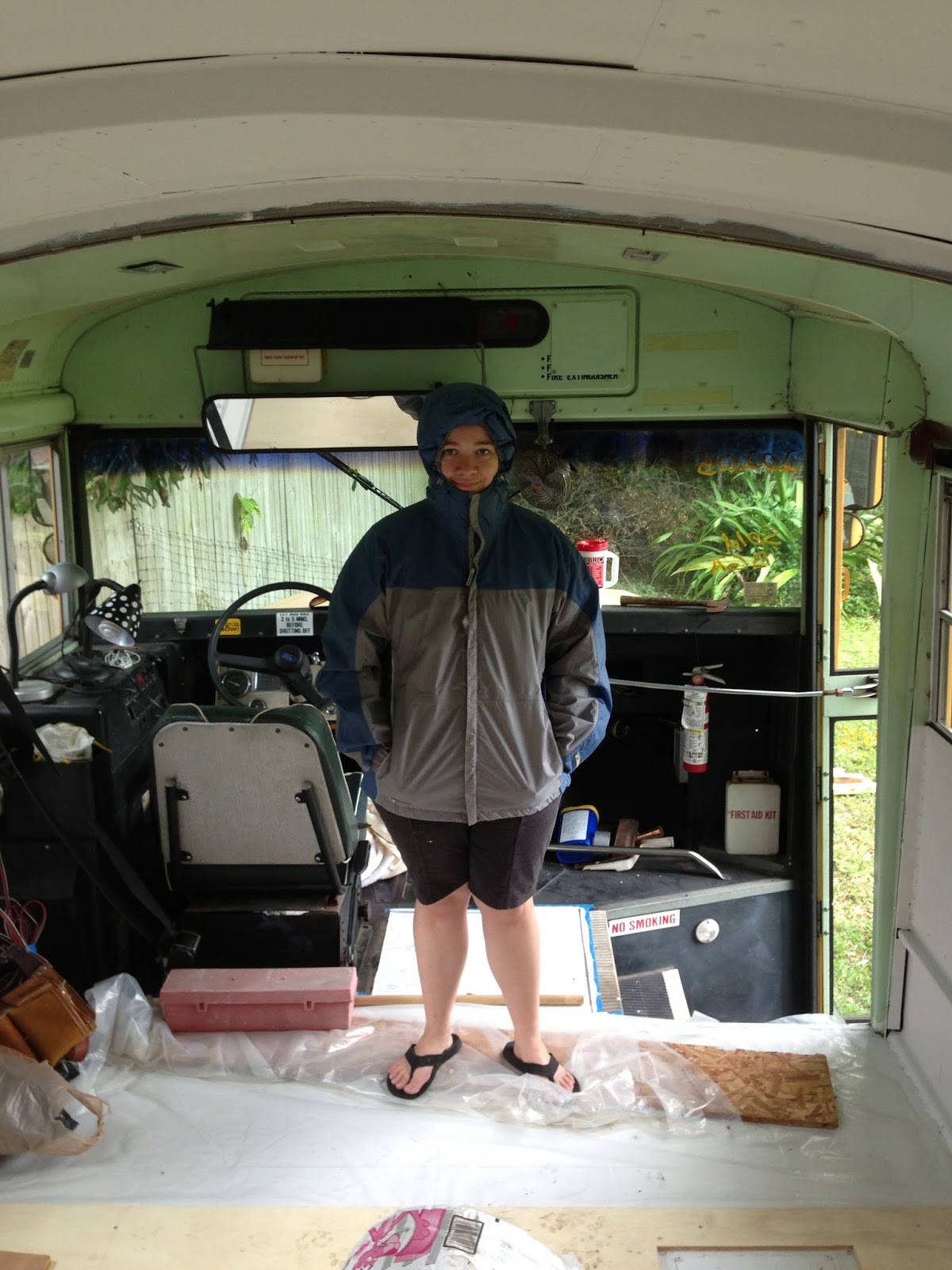 We did a lot of research into the type of insulation we wanted. Spray foam was the best r-value for the space, but would have cost about $1000, eek! Foam board would be an affordable option with very good r-value as well, however when on fire it creates toxic gas that is lethal. Since it's such a small space, and the ceiling is so close to our heads, we felt this wasn't worth the risk. So we decided on traditional fiberglass Pink insulation, R-13. We were originally concerned that the 3 1/2" insulation we chose wouldn't fit in the 2" gap of the ceiling. However, it was easily held up by duct tape and compressed into the space.  Also, it was on sale!  Just $70 for all that we needed! 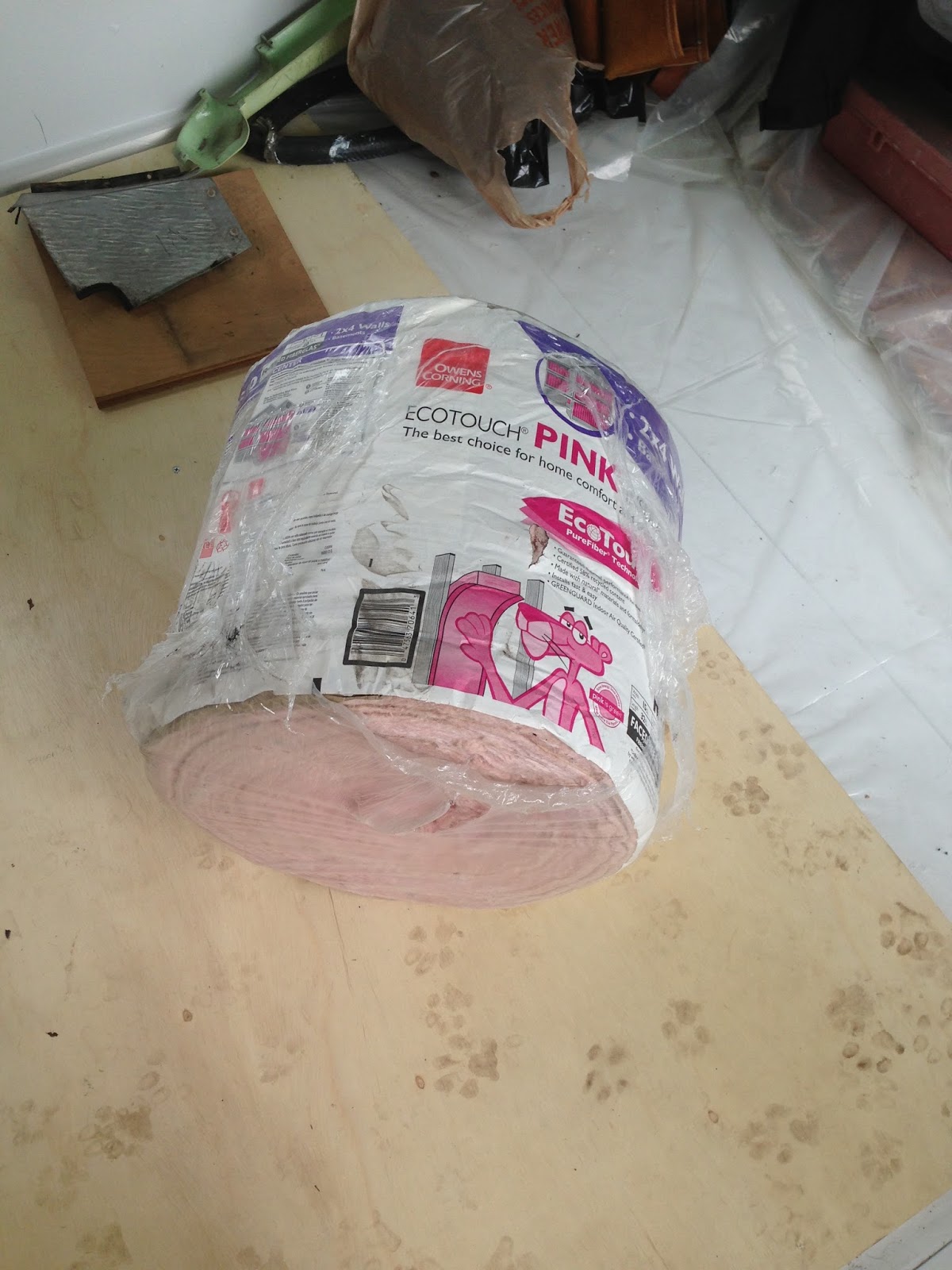 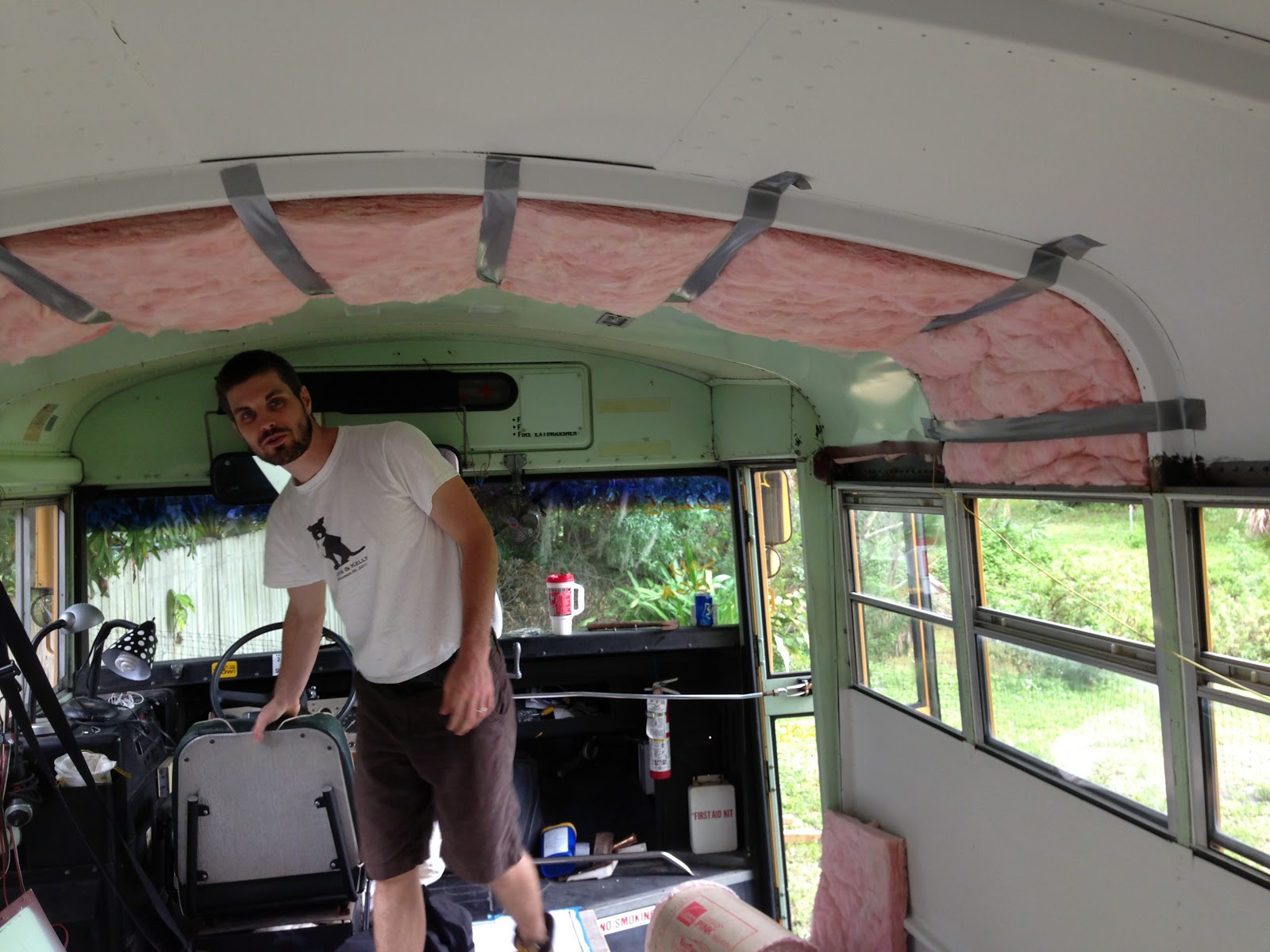 The most challenging part, as expected, was reinstalling the 50lb, steel ceiling panels. Getting those holes to line up with the ones in the cross beams was a pain in the butt. The first day, Chris and I worked alone and were only able to get 2 panels up in 4 hours. Today, my dad helped us and we were able to get 5 up in the same amount of time. They certainly weren't easy, but the extra set of hands and strength was so helpful. Thanks dad! 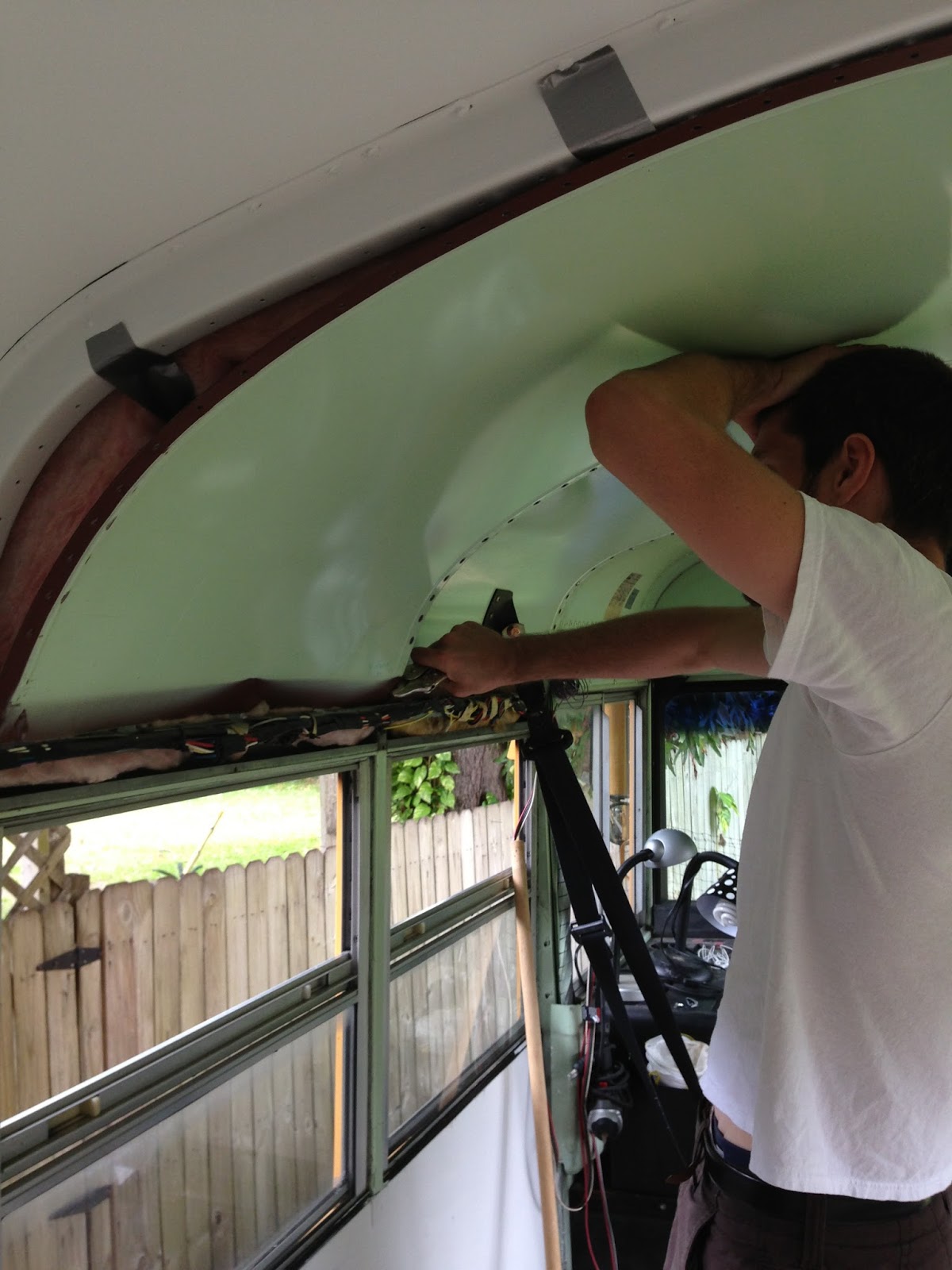 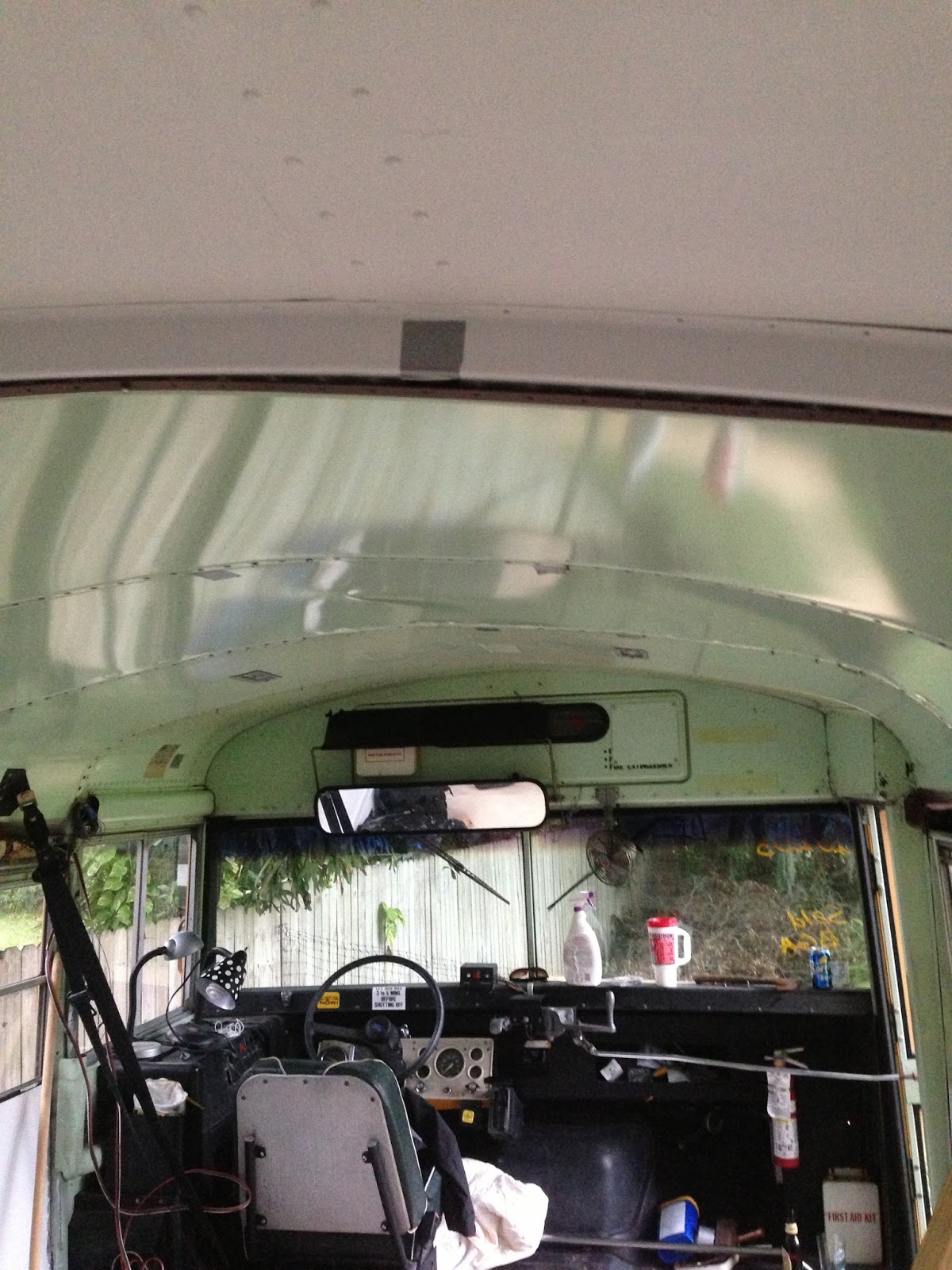 It was a unique dance getting the panels up. We developed a nice groove where Chris and Dad would hold the panel up and I'd scramble around telling them which way to push, pull, or pivot. Then I'd frantically drill the screws in the holes that did eventually line up. 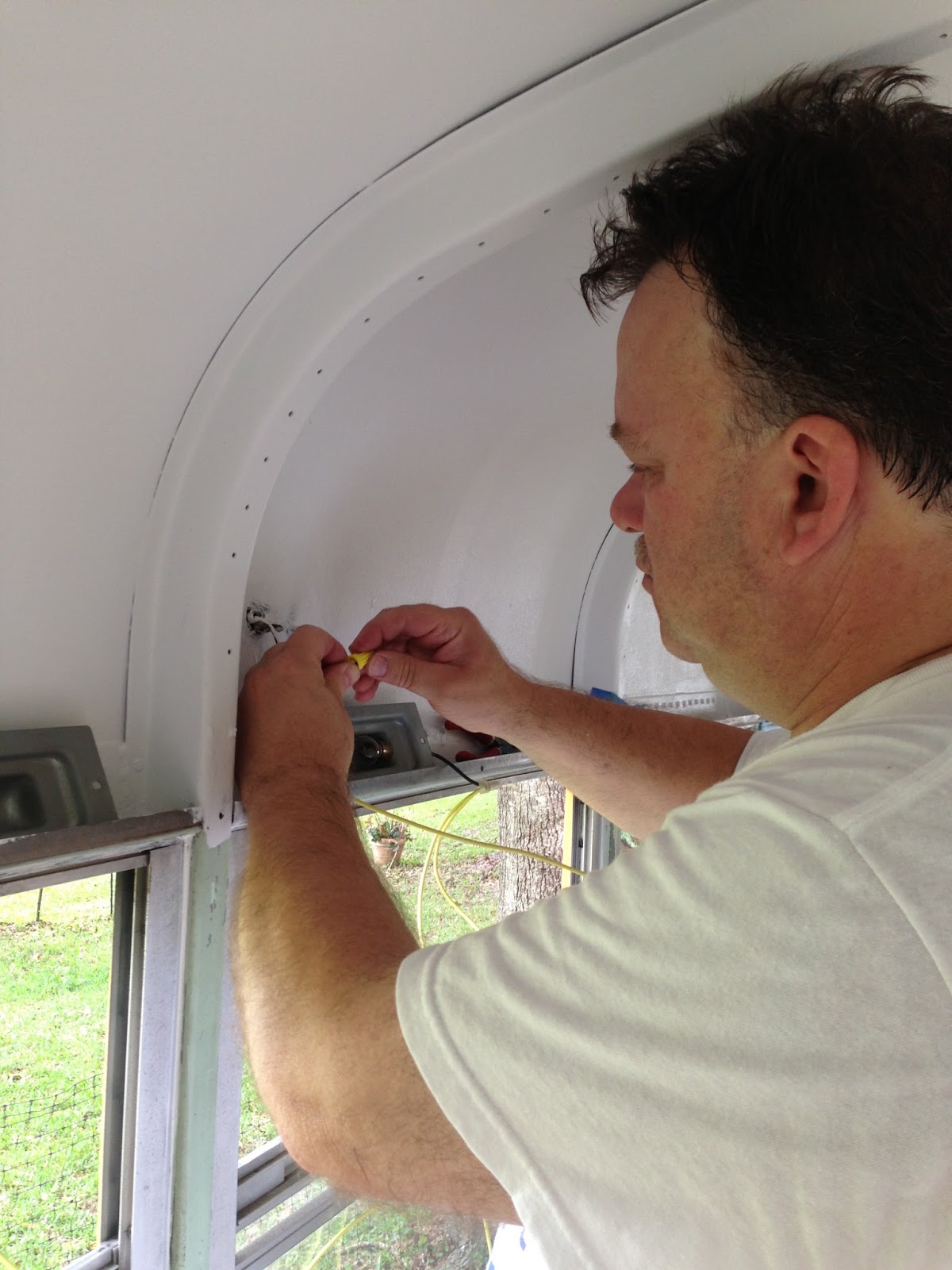 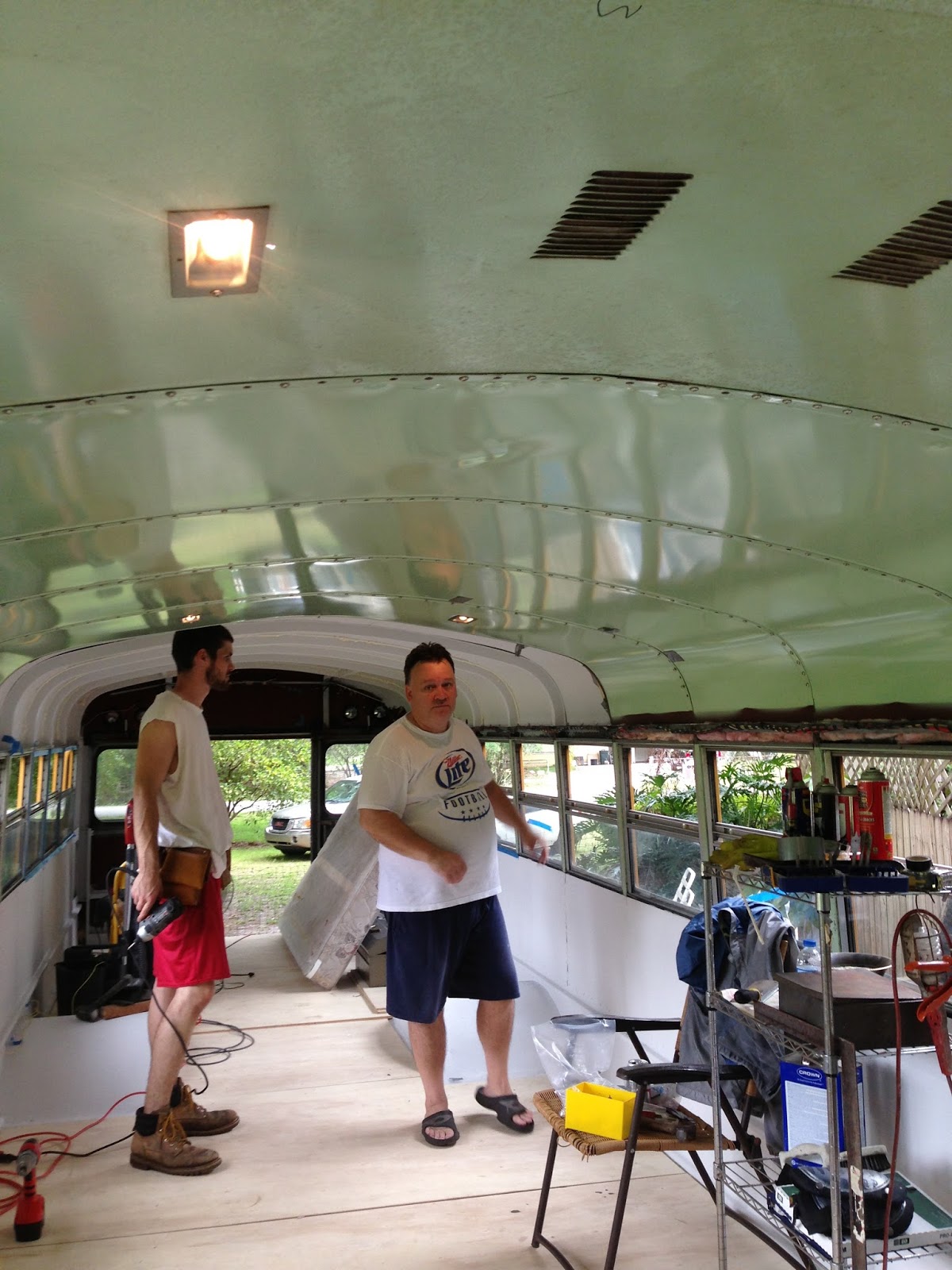 Eureka, they work! Eventually, these will be replaced by nice, low watt LED's, but for now these will do.

We put the screws in loose at first so that the panels would be flexible if they needed slight adjustments, then we went back and tightened them all. We also only added screws to every other hole, or there abouts. We plan on using the extra screw holes to attach the overhead shelves/studs to the frame of the bus. Our thought is that it's better to use existing holes than make more. 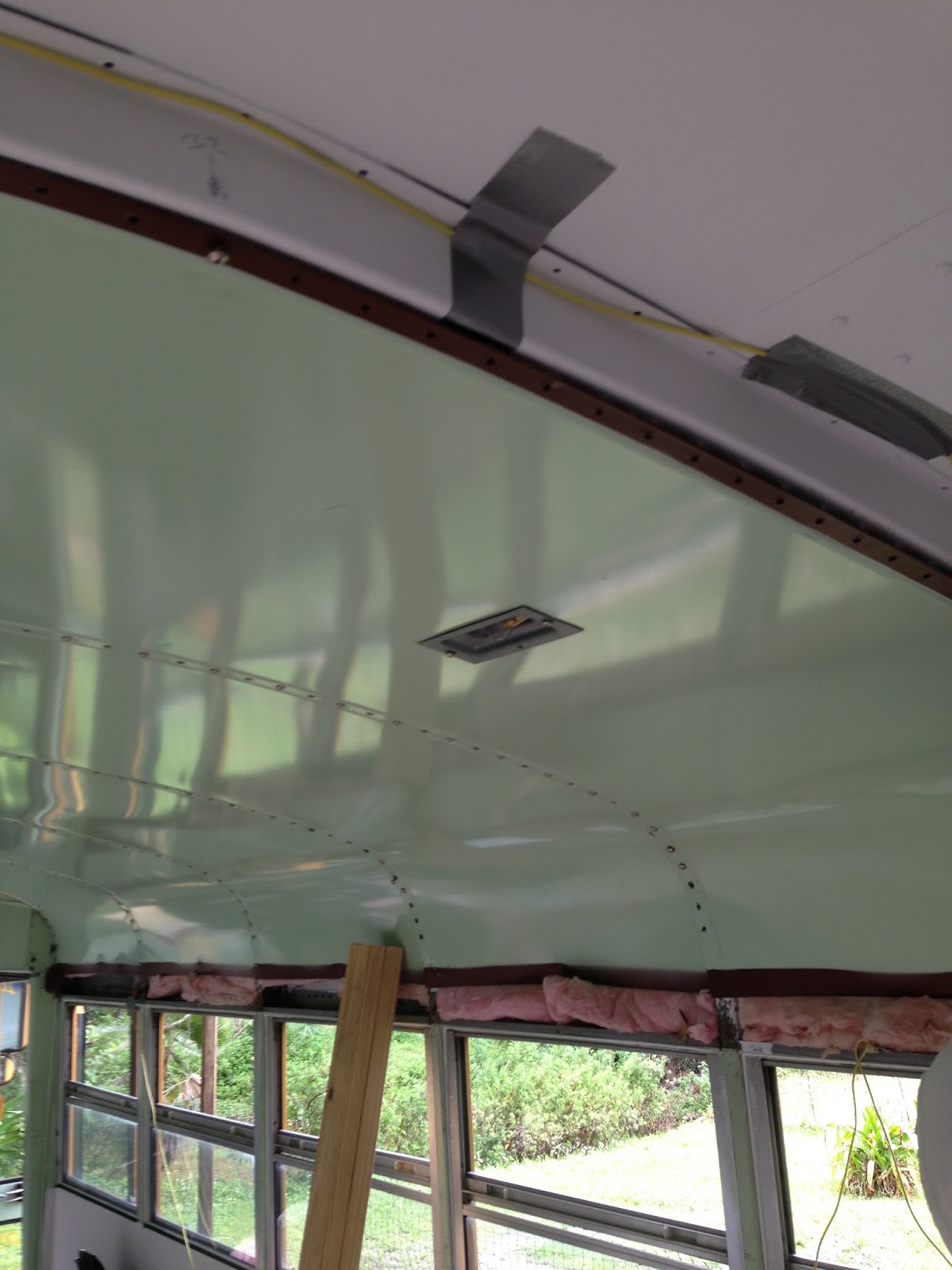 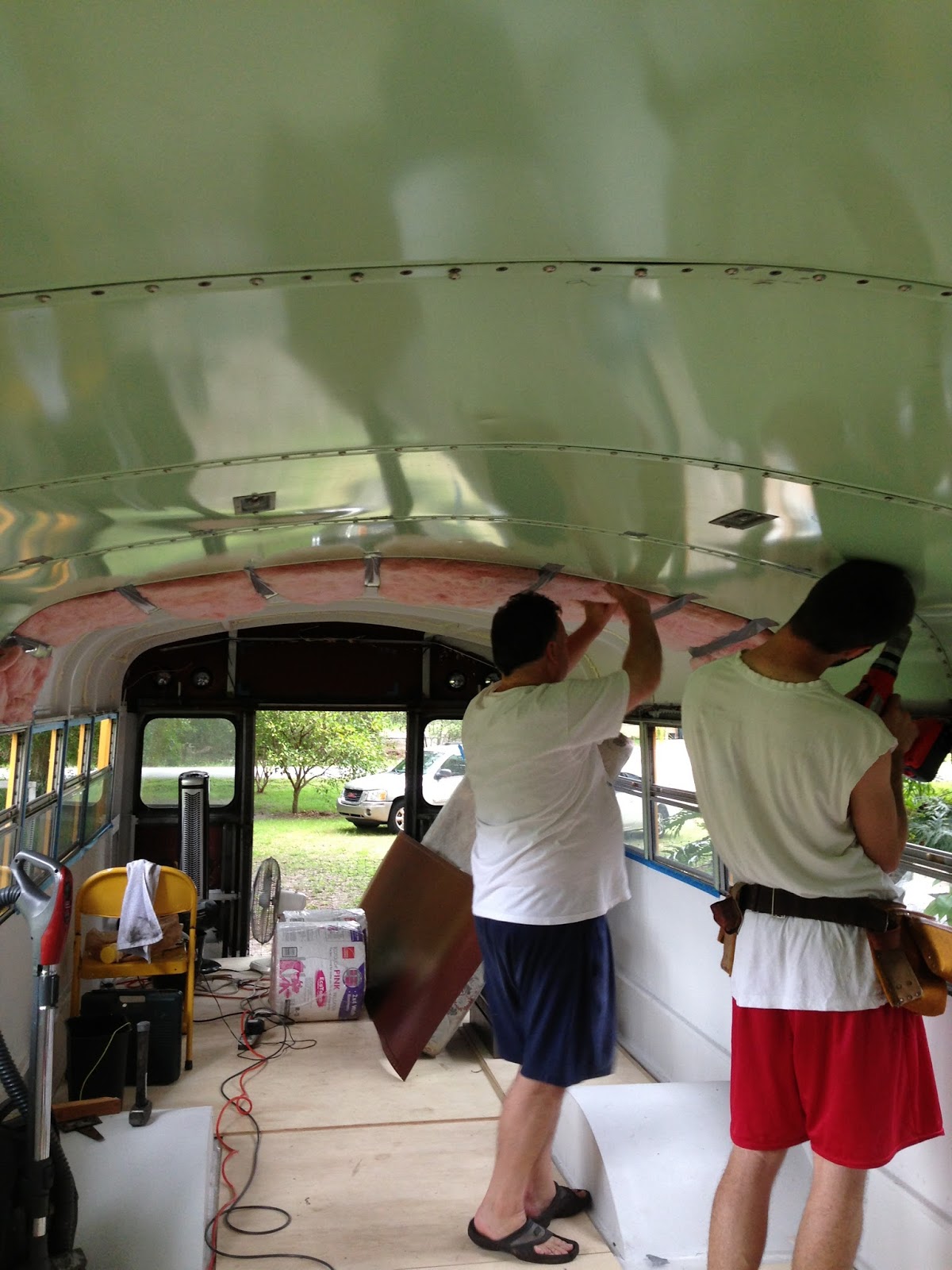 With more than half of the panels up, the sound difference in the bus is obvious. I don't think there's much of a temperature difference yet, but I know it will make a ton of difference once the real heat hits. 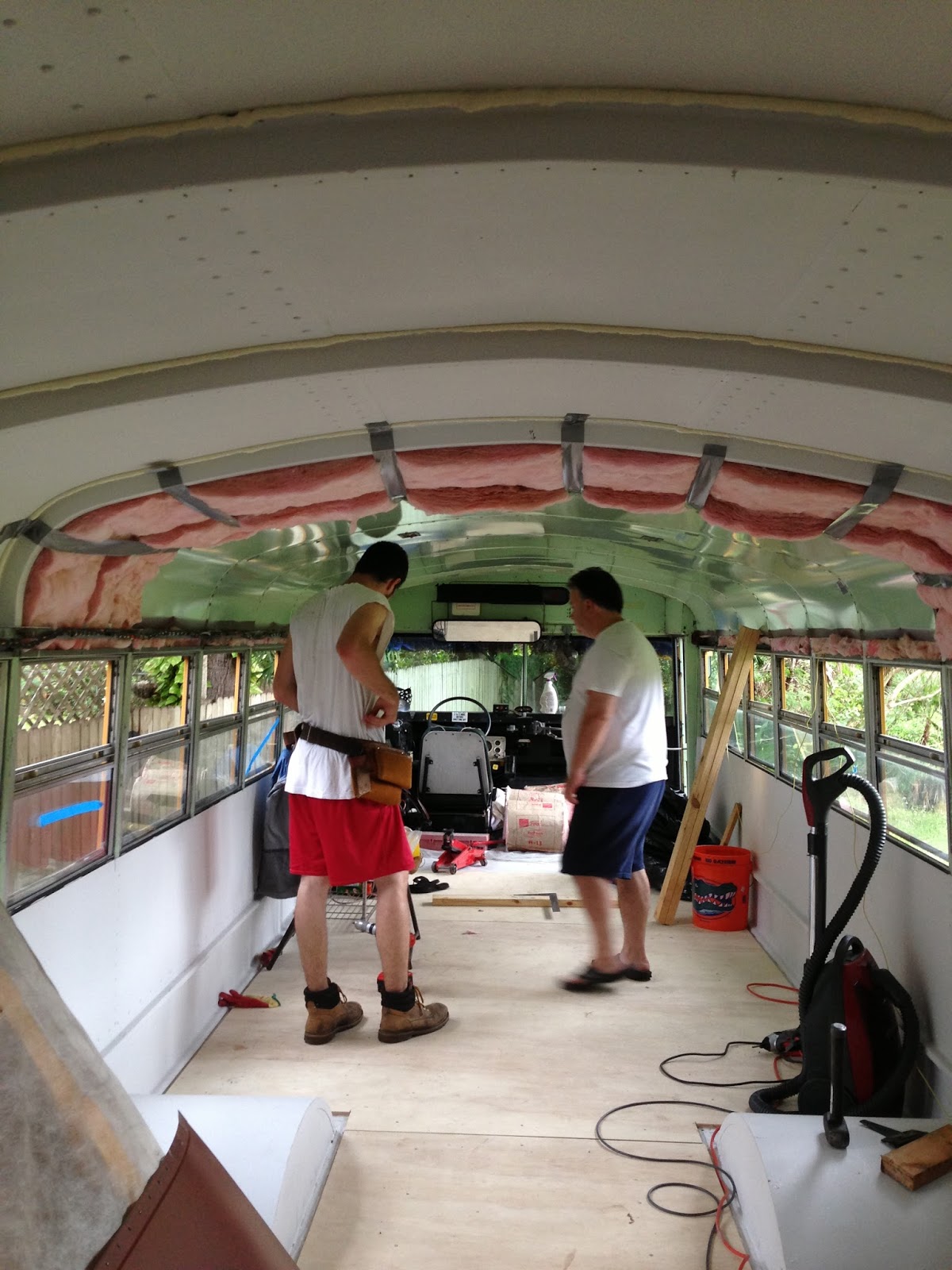 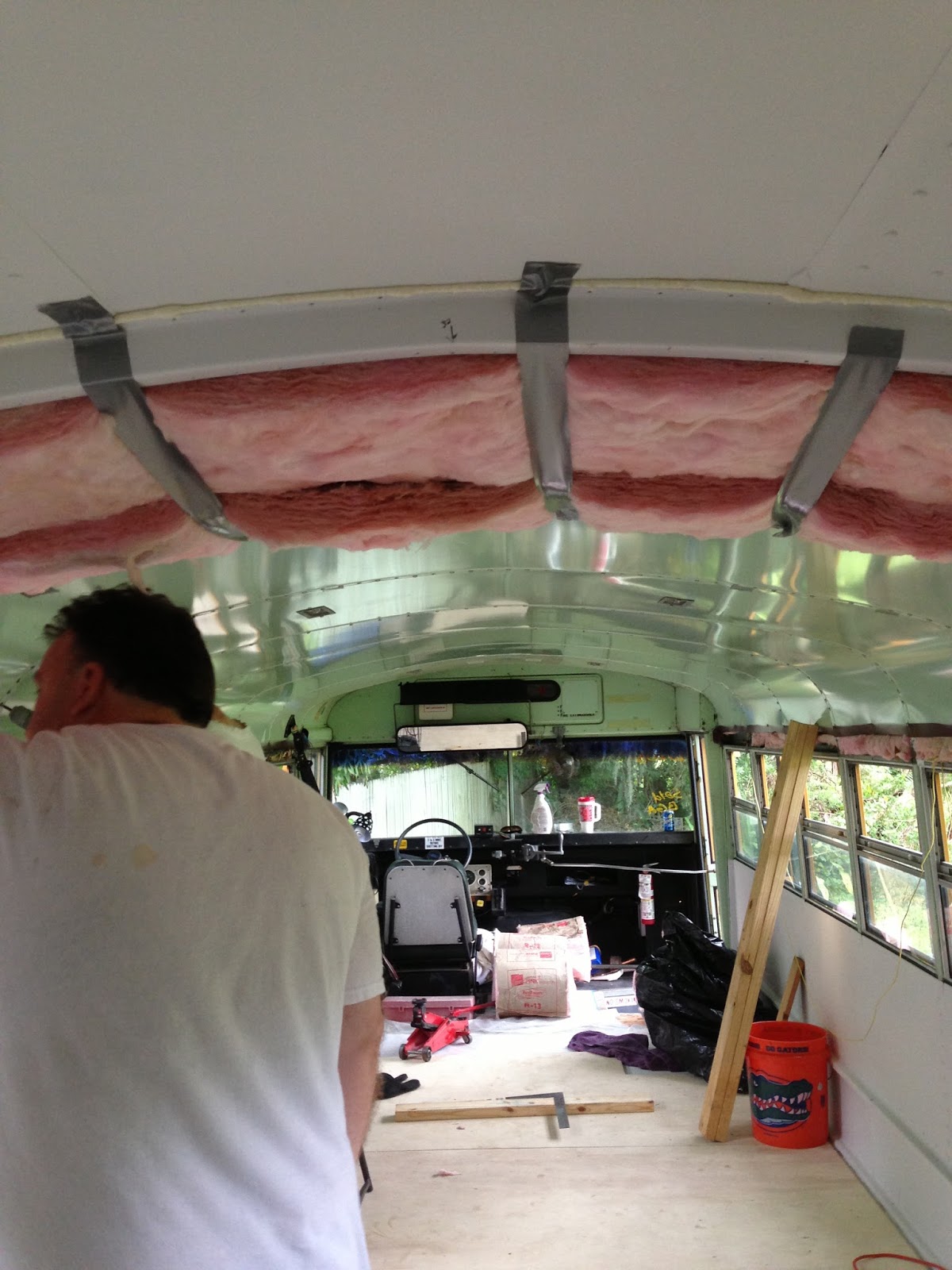 After a long day we got to panel #9. Even after an hour of wrestling with it, we just couldn't line it up. It was getting late and harder to see (even with our newly installed lights) so we called it a night. We were really hoping to get all of the panels back up this weekend. I was reminded that it took almost 2 weeks to get them all down and we managed to get 2/3 of them back up in 2 days, not bad!
Posted by Unknown at 10:22 PM