A Not So Just Right Mistake

As many of our close friends and family may already know, we had our first serious accident on the Just Right Bus two weeks ago. I'd like to preface by saying that Chris is ok and he is expected to make a full recovery.

It was a great day, we were working full steam ahead on the bedroom and planned on putting in a windowsill on my side of the bed as well as a nightstand box to hide some wiring and provide additional tabletop space for my laptop and books when I'm in bed. We had removed everything from the bed area, the mattress was in the hallway, I was in the middle of painting our bedroom walls and Chris was splicing a board from 6 inches wide to 4 inches wide when I heard the saw turn on briefly, turn off and then him shout "Damnit!"

I didn't think much of it at first, he frequently curses when he makes an error, perhaps measuring incorrectly or cutting the wrong end of a board. The back door was open to help waft the paint fumes out of the bedroom. I had removed all of the curtains from the bedroom and they were currently in the washing machine. The dogs were lounging in the yard, Bon Iver was playing on our iHome. Then Chris appeared in the space of the open back door clutching his left wrist with his hand and said "I think we need to go to the hospital."

It only took about a second for me to register what had happened. The top of his hand looked like a shark had bit him, you could see every spot where the circular saw blade's sharp ridges had gotten him from his ring finger's knuckle to about halfway up the back of his hand, there wasn't much blood (yet). I had no idea how deep the cut was, nor was I interested in investigating. I jumped up, dropped my paintbrush in the bucket, threw him the closest towel I could find, "Direct Pressure, Elevation! Winston, Willow come!". I quickly changed my paint stained sweatpants full of holes to a pair of jeans, asked him if he wanted a change of clothes, flopped the mattress over so the dogs couldn't roll around in the pan of paint, found the car keys, locked the dogs in the bus and we were on the road in a matter of 3 minutes tops. As we walked across the yard to the car I spotted something shiny on the ground near the scene of the crime. It was his wedding ring; he had cut right through it. 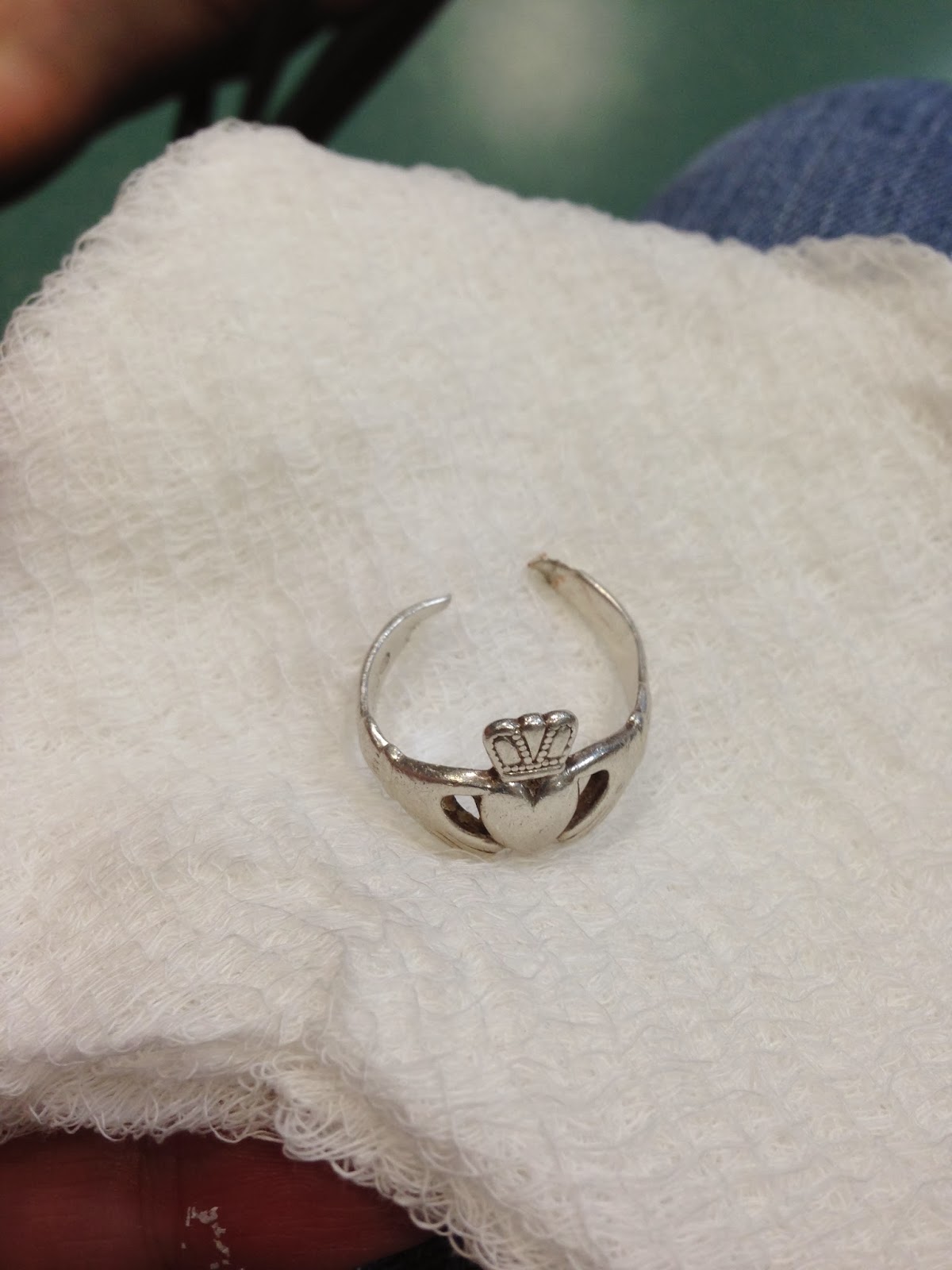 In the car he tried to explain to me what happened, I didn't get it. At the hospital he explained again what happened, I still couldn't understand. Finally, while he was in surgery it clicked. He did almost nothing wrong. He was cutting on an even surface, he was wearing goggles, he had set up a jig so that his hands weren't close to the cut, he measured twice. What happened was a complete, silly accident. He had already started his cut and had to adjust the saw horses so he could finish it. After the adjustment, he went to put the blade back into the existing hole of the cut, his right hand slipped, he hit the trigger, the blade which wasn't in the hole of the cut yet, hit the wood and bounced backwards into his left hand.

We spent 10 hours at the ER that day. Chris had cut directly though his wedding ring which the doctors suspect helped save his finger. They performed surgery to add some bone graft to the area of his finger where he hit the bone. He was in high spirits the whole day and not in much pain. After surgery and 14 stitches we went home at about 1 in the morning. He has about 2 months or more of physical therapy to look forward to and the stitches come out this Friday. It will be a nasty, frankensteinish scar but he should have full function of his hand and ring finger.

I never thought something like this would happen to us. When the possibility of an accident like this infrequently crossed my mind  I assured myself "we're not that type of person". We're too smart, we're too careful, we've gotten too good to let something like that happen. Well, that was all a lie or a mistake or something else, I'm even sure what to call it. We're pretty darn smart, we're very careful, we know all of the precautions and rules and we have experience working with these tools but the fact of the matter is it still happened to us, and it could still happen to you. 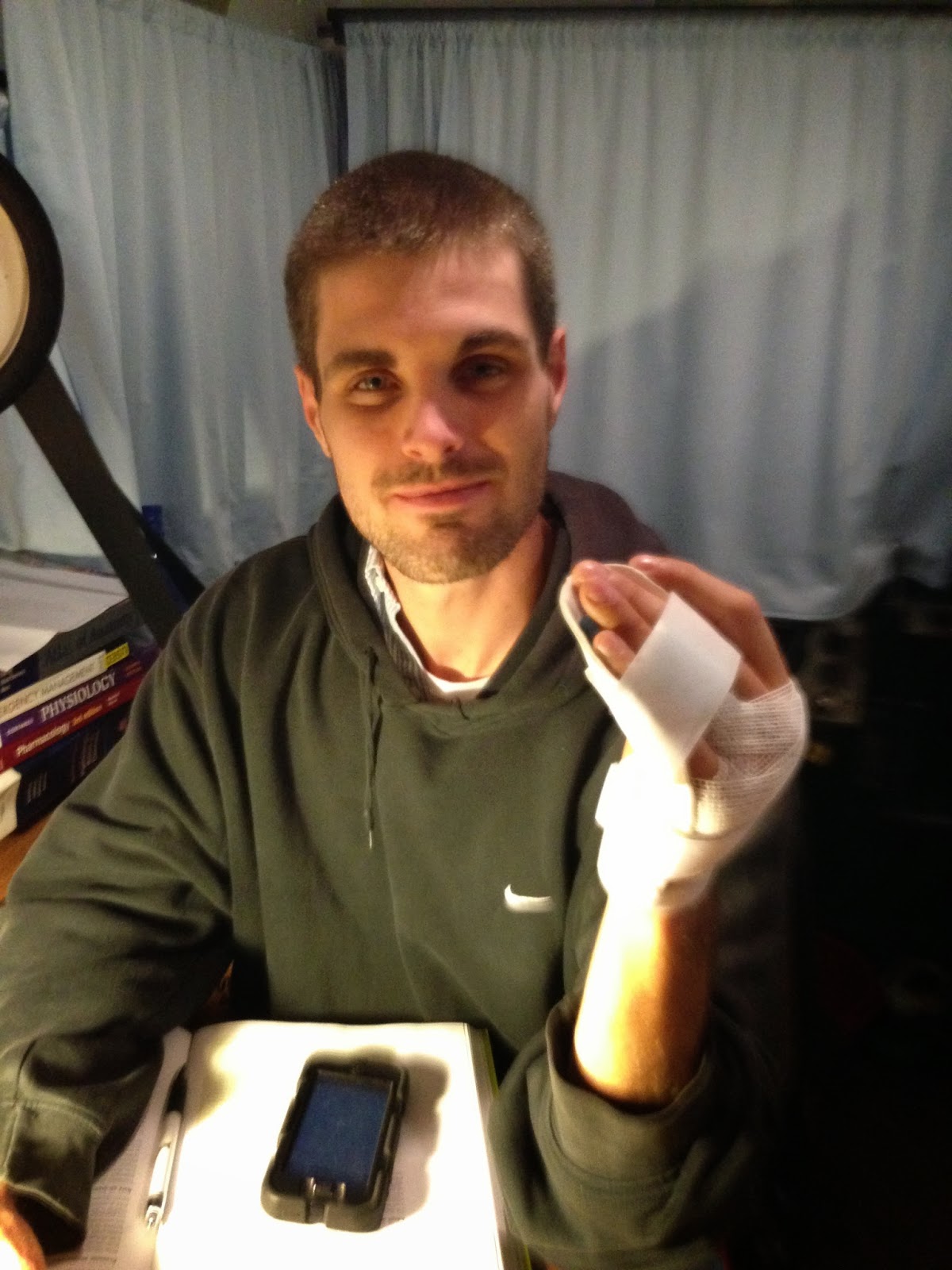 We're both very humbled by this experience and I debated for the last two weeks if I should even share it with the Just Right Bus community. However, I feel that if it could help at least one person down off their high horse of invincibility, sharing our story could save someone's finger, or hand, or worse. Chris will be fine and although this landed us a hefty hospital bill, I'd bet more than the bill that it won't happen to him again. So be careful all of the time, don't think you're too good for mistakes because they can happen to anyone and don't take off your wedding ring or you could lose a finger.*

*Just kidding, remove all jewelry and tie back any hair or loose clothing to prevent the possibility of injury via snagging. Also, as pointed out by several good friends, if Chris had been wearing good gloves this injury could have been prevented.