The Eccotemp L5 and L10 Hot Water Heaters: A Review

We purchased an Eccotemp L5 unit back in December 2013 for $109 and were very excited. We had been living in the bus for two months with no hot water and it was starting to get chilly out so cold showers were no longer acceptable. We easily mounted the unit on the side of the bus and plumbed it into our relatively simple system of one tub and one sink. We saw other Tiny Homes using the same units in a similar way and it worked well from the very start and gave us plenty of heat, was relatively quiet and fairly efficient. During that time we were going  though a five gallon propane tank every six to seven weeks or so.

It seemed to hold up well and worked fine after several rainy or windy days and we carefully watched the temperature to ensure it was drained properly when it got below freezing (only one night this winter here in Florida). Plus it was pretty cute. 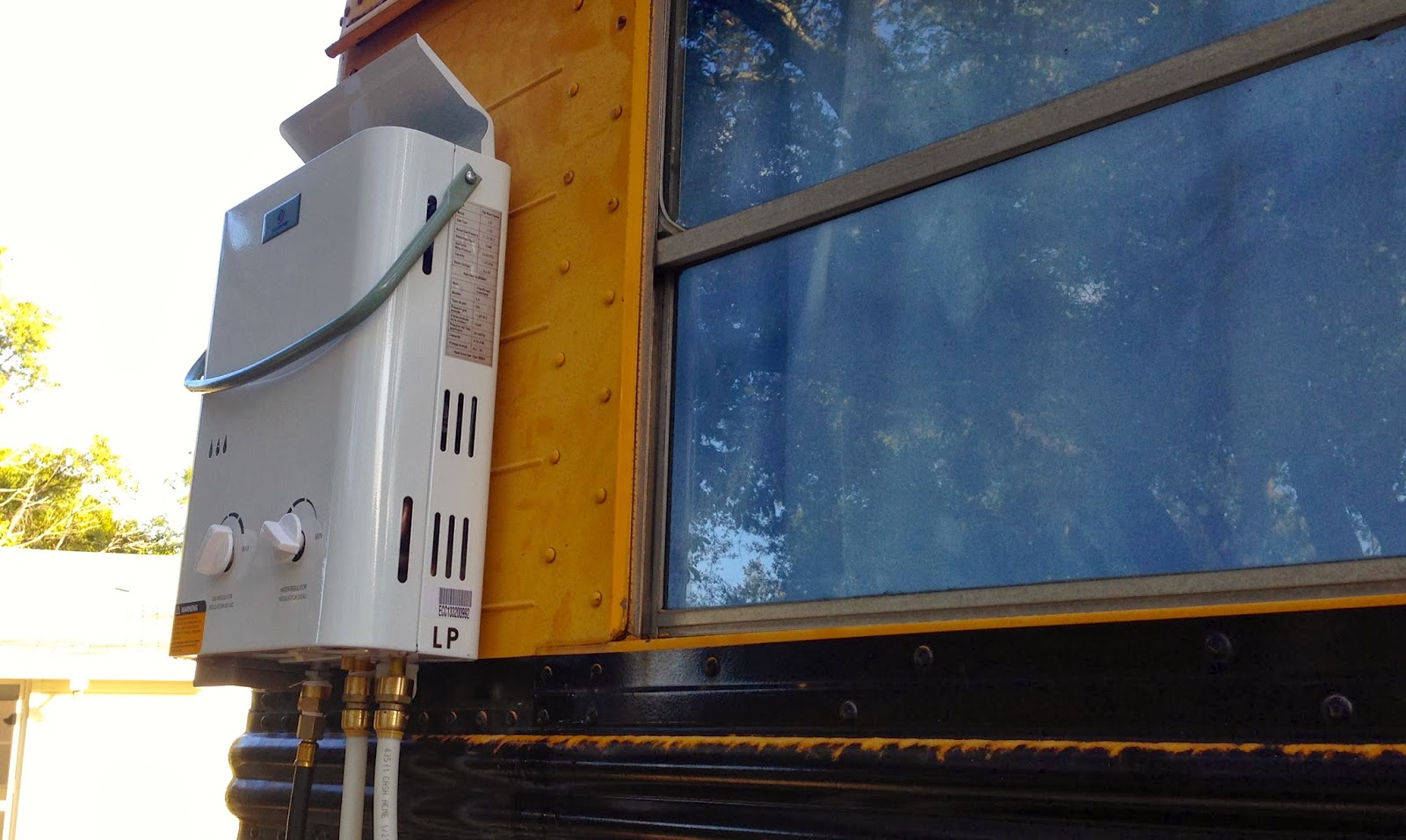 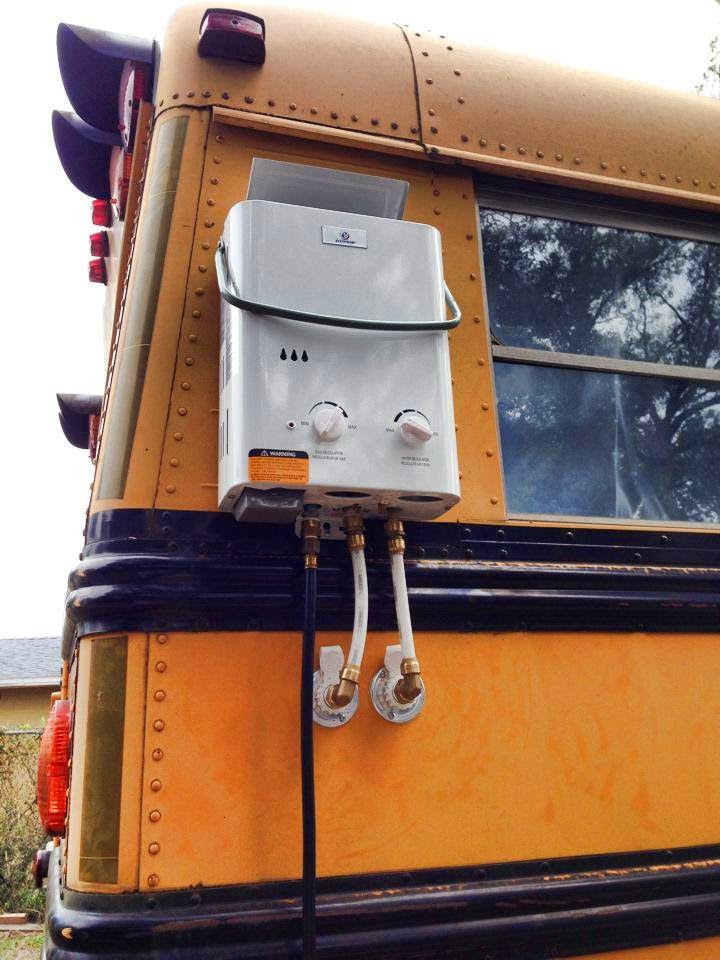 About a month ago we started noticing that every once in a while after running the hot water for a while we'd hear a "squeeeeeel poof" sound coming from outside. We tried to make it happen for a while so we could observe but it seemed to be random.

Then, one night, I heard heard an exceptionally loud whine and boom from the water heater and rushed out to see if it had completely exploded off the bus. Fortunately, it was still mounted firmly to the side (with the recommended clearances) but the top guard was glowing red from heat. We immediatly switched it to the off position and turned off the propane. The next morning we inspected it more closely and could see a very obvious black mark from the ball of flame that had erupted from it the night before. At that point we were very thankful for our steel exterior shell, which survived unscathed. 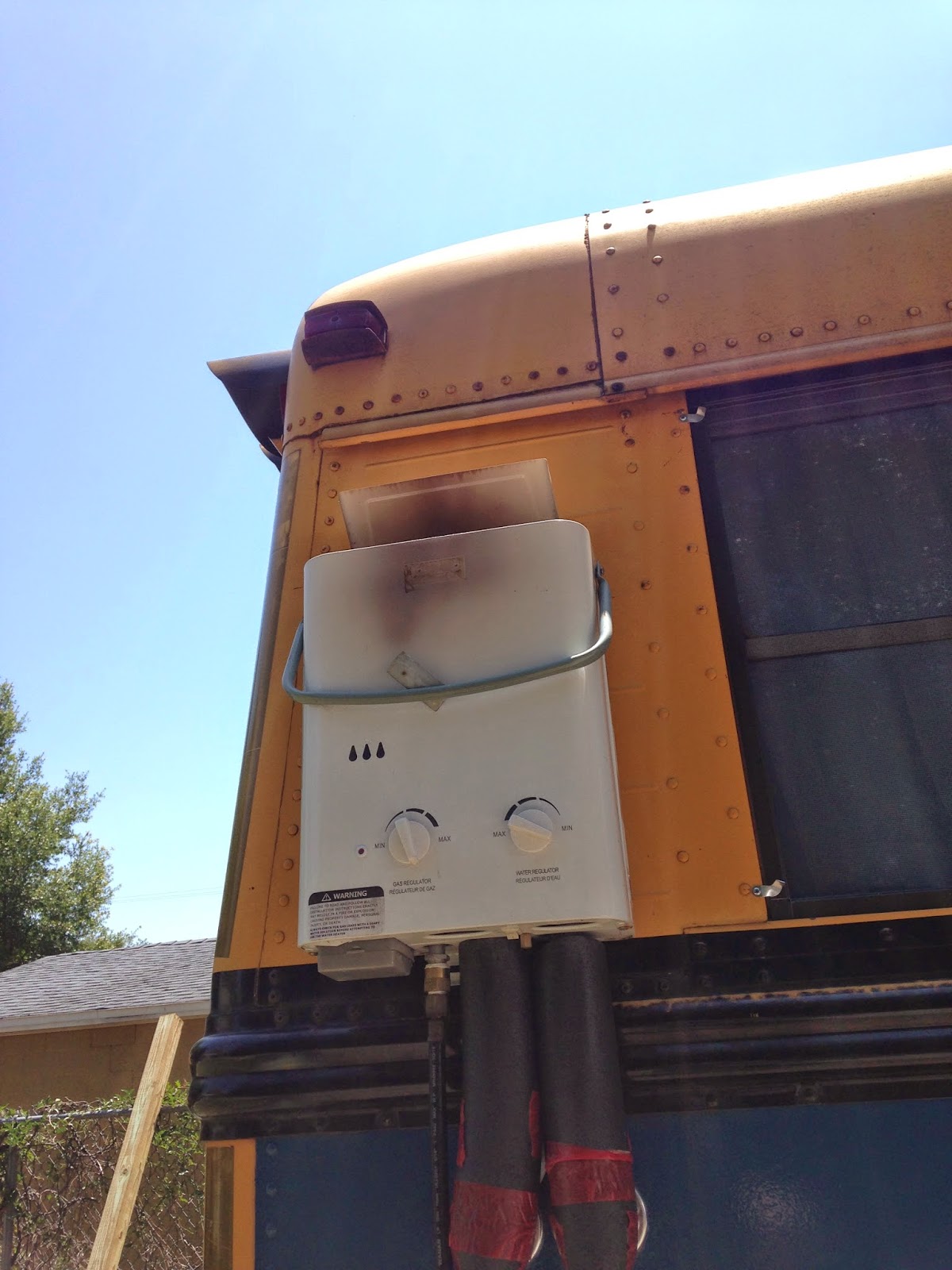 Chris took down the water heater and took it apart to see if he could figure out what went wrong. The inside was a wreck and pretty crispy. I took a bunch of photos and sent them to Eccotemp as the heater comes with a year warranty and it'd only been about six months. 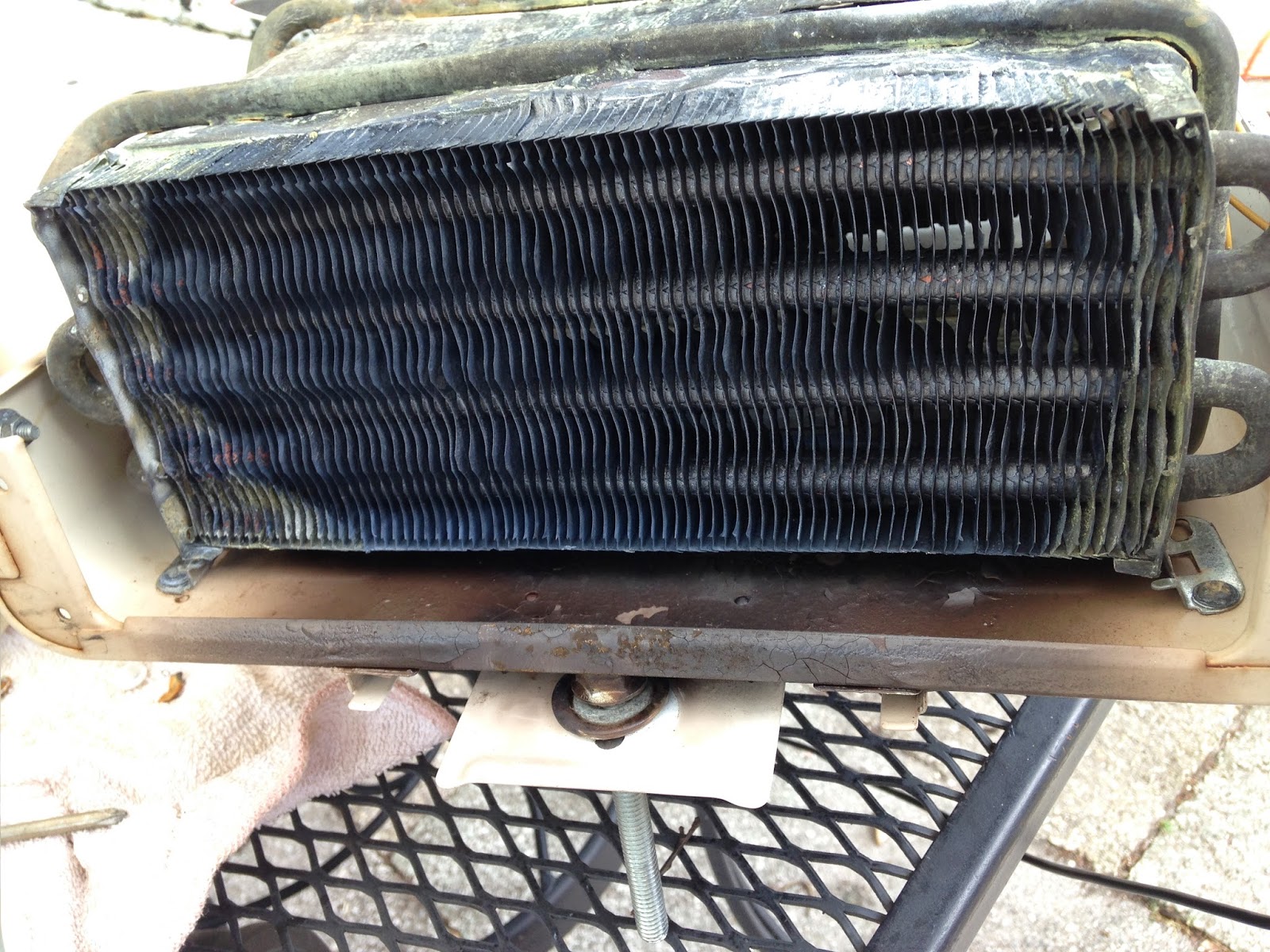 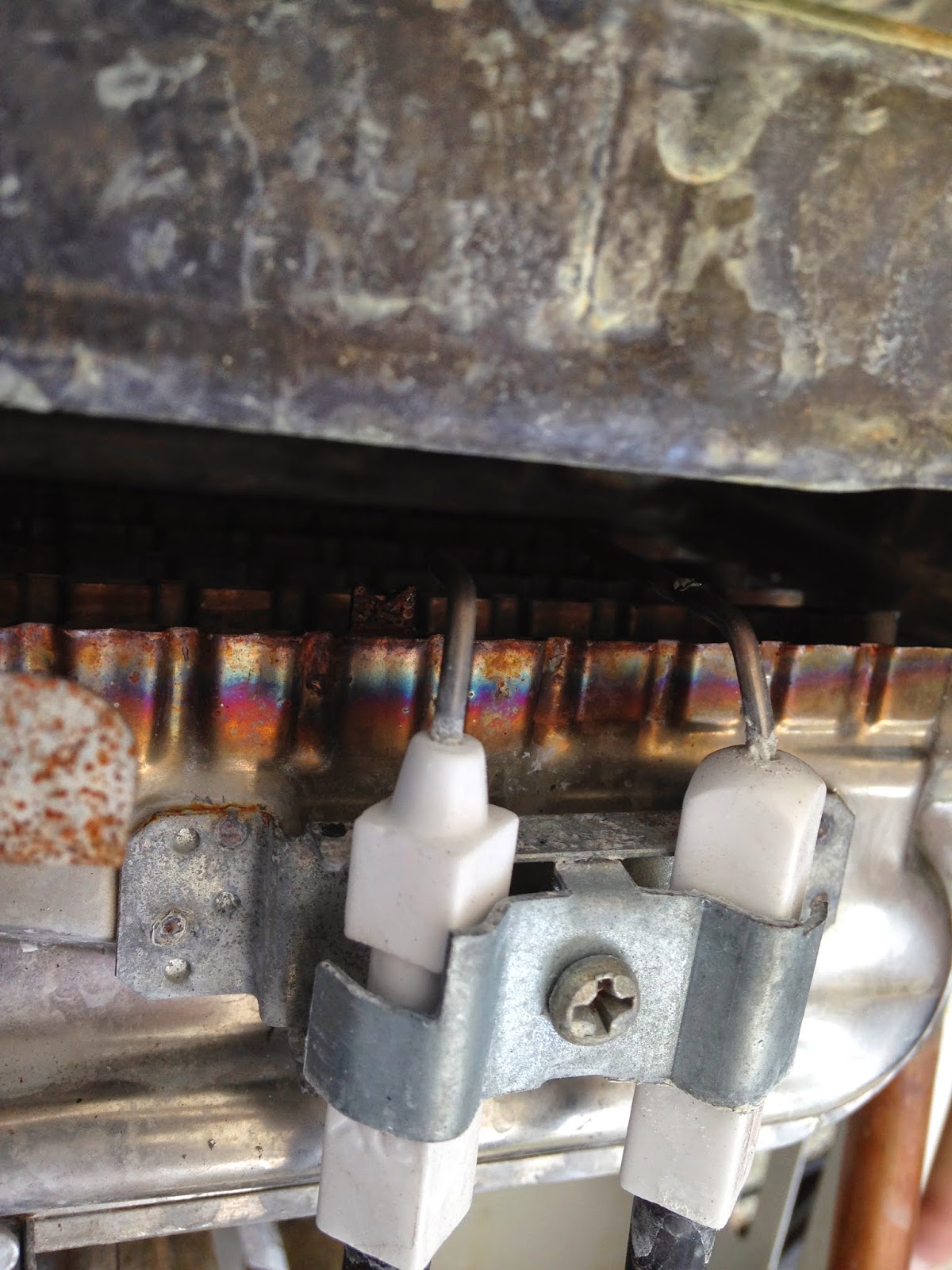 I was a little disappointed with the service from Eccotemp at first. It took four email exchanges and over a week before they actually addressed the problem. At first, they said we voided the warranty by permanently mounting the unit to which I responded with several direct quotes from the users manual indicating that the unit could be permanently mounted. For example, under the "Getting Started" section of the users manual, the manual says "Use the top tab on the unit to suspend from a screw adequate to holding 15 pounds. Place at a comfortable height without putting stress on the gas hose. If the unit is to be permanently mounted, use screws to attach the bottom tab firmly." There were also several explainations as to how to plumb the unit into a garden hose or an existing system. Additionally, the warranty said nothing about mounting the unit permanently.

I also explained that there were many raving reviews on their website about this product being used in a similar way as ours and that I felt it was a defect in something inside the unit that went wrong, not an issue with quality of the overall unit. I also made it clear that I found direct communication via phone to be more efficient and pleasant than email.

Three days (and two more cold showers) later I got a call from Mike at Eccotemp. They use an internet phone service there and his call was dropped three times during our conversation. That was pretty frustrating. At first Mike was a little defensive, he made it clear they would not be replacing our unit and apologized that the manual was misleading and said they would be rewriting it.

Mike suggested that the Eccotemp L10 would be a better model for us as it is made to be mounted permanently outside and had a rain guard. I agreed that we should upgrade to the L10 for our next unit and fortunately, they were willing to work with us on the price. They essentially gave us the price of the L5 off of the L10, normally $260. They also covered the cost of shipping and shipped out the new unit that day. Mike became much more pleasant to work with and talk to after we decided on this resolution; he was actually a really nice guy. 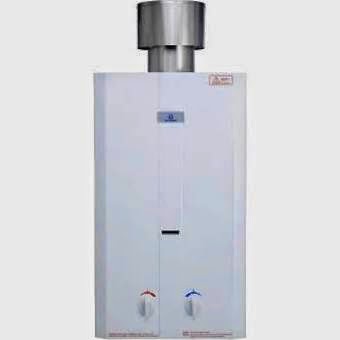 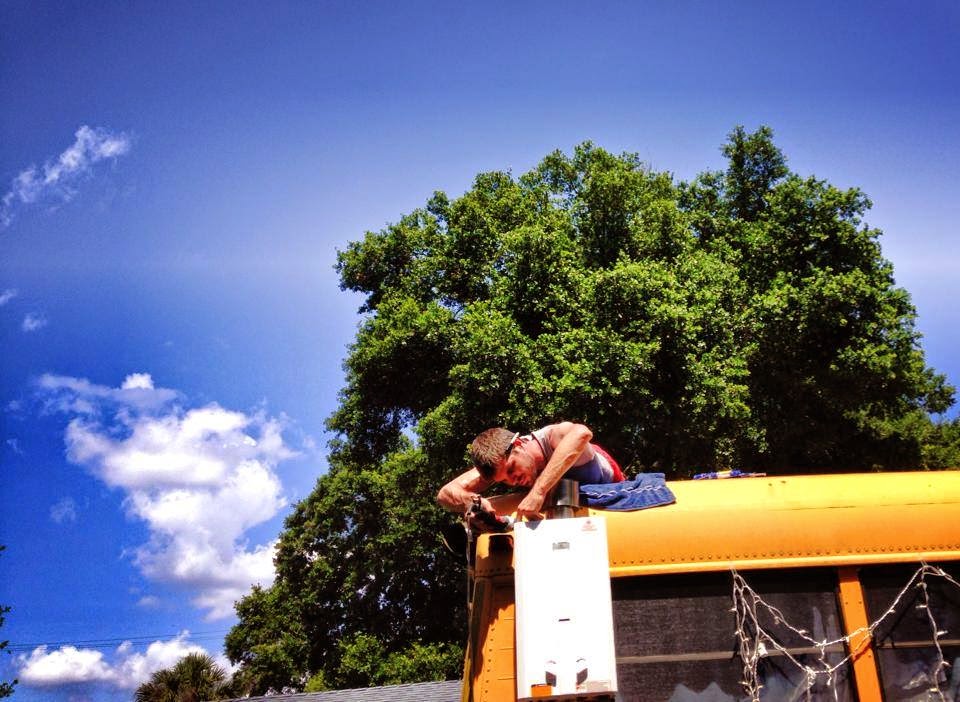 Yesterday, we mounted the new unit. It's 8" taller than the first plus it has a flue at the top. It worked right away and seems to be doing just fine. We are able to run it at a much lower gas to water flow ratio than the L5 and the hot water gets to our faucet in under a minute. I'll write an update on our experience with the L10 in a few months, but for now we're satisfied.

We chose the L5 originally because of the size, the fact that it had a battery start and the excellent price. We never had any issues with it as far as leaks or traveling, though I wish we had gone with the L10 from the start to avoid this whole experience. I know of several people who have been living with the L5 for years with no problem so this experience may just be an exception, not the rule.

Overall, Eccotemp puts out a great product for the price that meets the unique needs of many tiny home dwellers. However, in the event that you do have an issue and need to contact them with something you need to be diligent and firm otherwise it may not be resolved in a timely manner. No one has time for cold showers.
_____________________________________________________
Update! 2/2016
We had some minor issues with our water heater since installing it. Several times the heater has simply stopped working due to a poor connection in the battery compartment. Chris had to rig up a aluminum foil contraption to ensure proper contact between the batteries and the ignition. The compartment becomes rusty easily because the seal isn't completely waterproof, thus resulting in the poor connection. Also, The hot water heater got frogged up (as in, a frog got stuck in it and clogged it up pretty bad). We had to back flush it and it started working again. While putting it back together Chris tried to tighten a screw that controls the amount of gas that flows and it broke off, meaning we had to replace the entire gas/water valve. Even though our eccotemp L10 is still working, I'd never get another eccotemp product in the future.
Posted by Unknown at 12:29 PM 10 comments: