It's been a very busy May so far and despite heavy rain early in the weekend, we were fortunate to have some wonderfully cool and sunny weather today. Now, some updates on the bus.

We bought an LED light to replace the bulbs in the ceiling of the bus. At $9 each we decided to just get one to see how we like it before buying  all 6. They're interesting lights and are actually made up of 9 lights in 3 rows of 3. 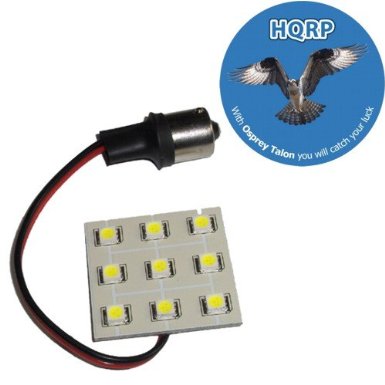 Unfortunately the pictures I have are from the night the bulb arrived so they're not the best quality, but you can certainly see the difference in the old yellow bulb and the new LED. 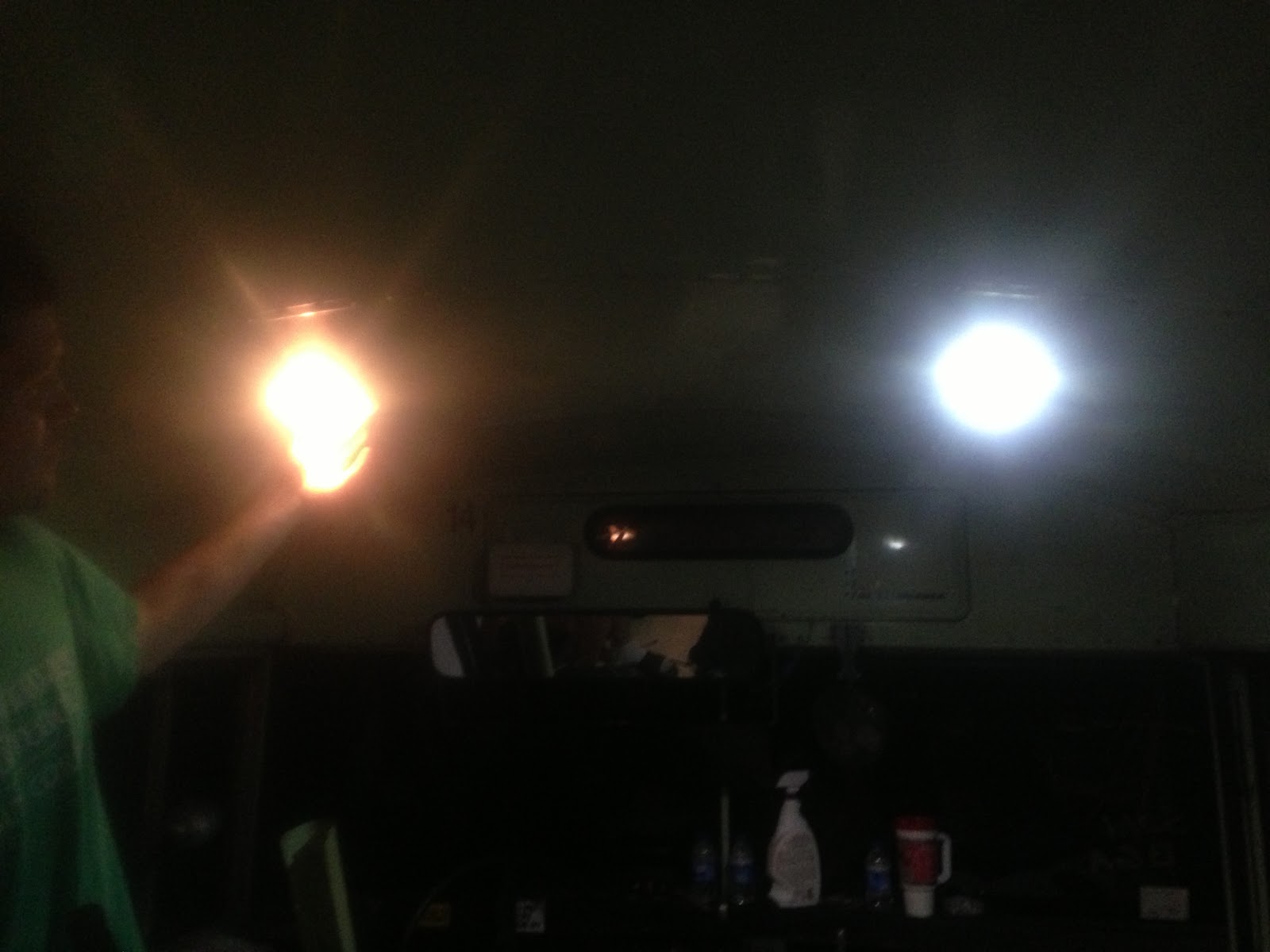 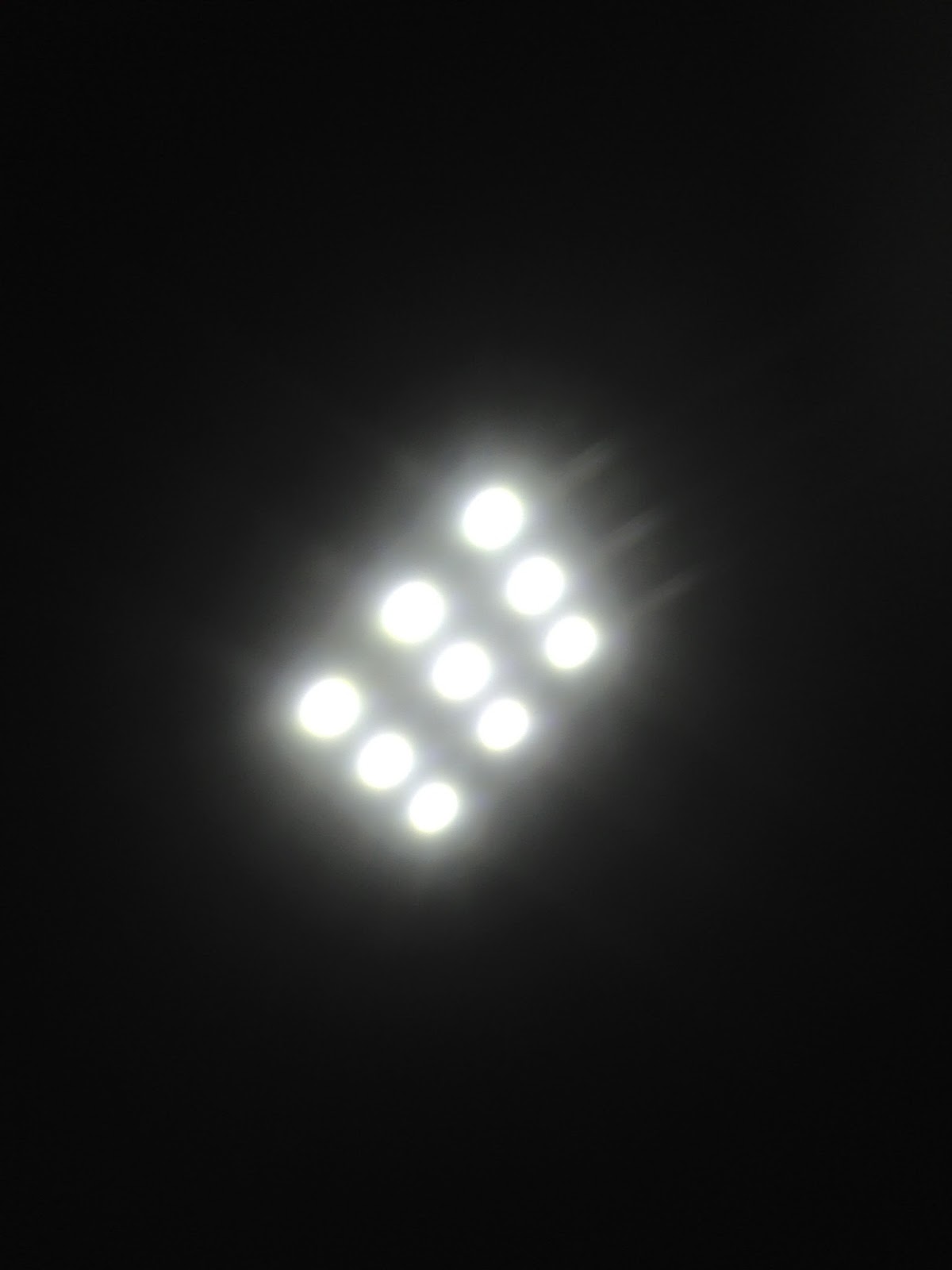 Chris also took some time to rewire the lights in the back of the bus. Originally, the top orange and red lights were flashers that only went on when the bus was letting children on or off. Chris wired the top yellow lights to the blinker lights on the bottom, and the top red lights to the break lights. 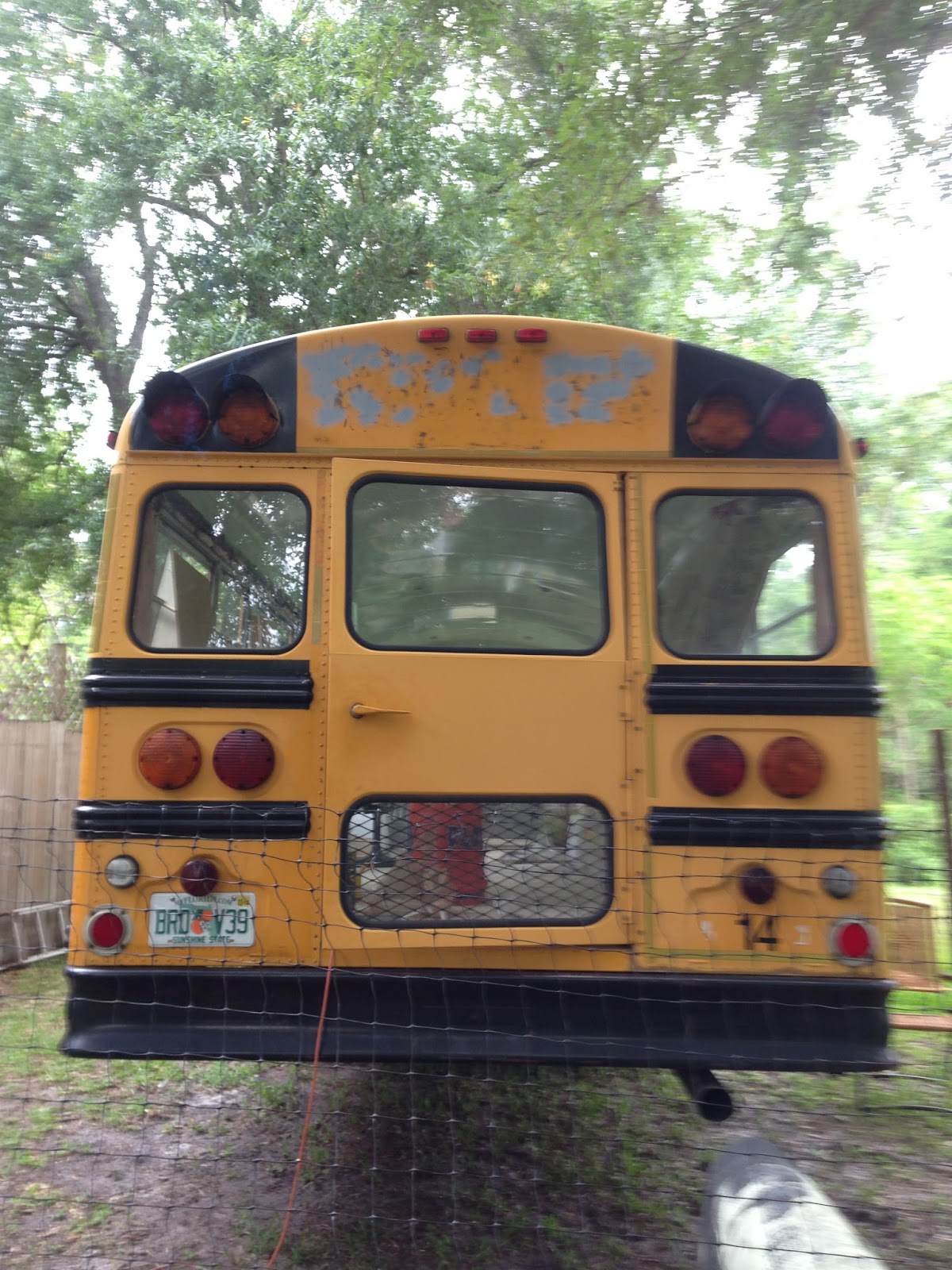 Here's a video that demonstrates the rewiring halfway completed so you can see the difference. 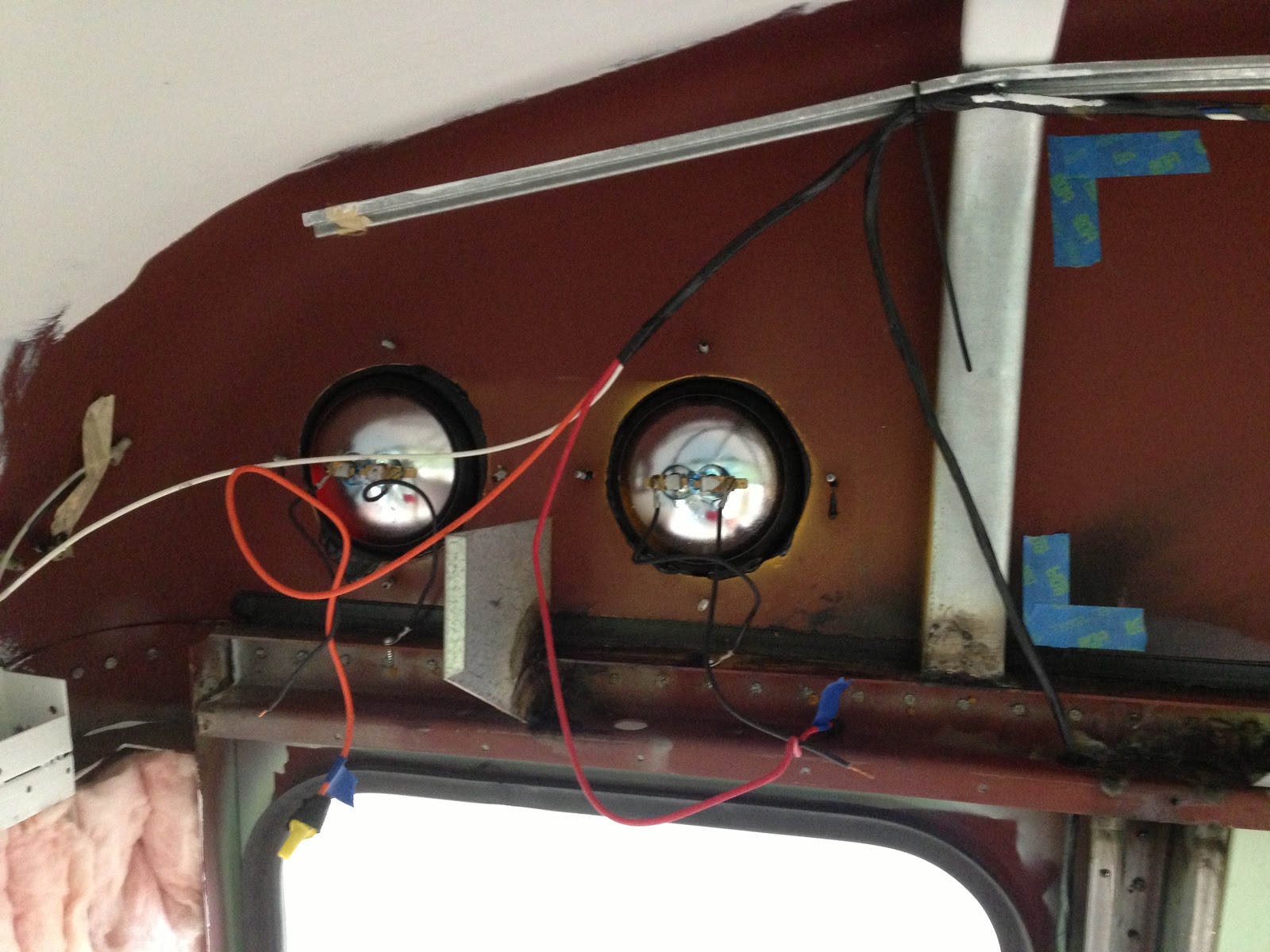 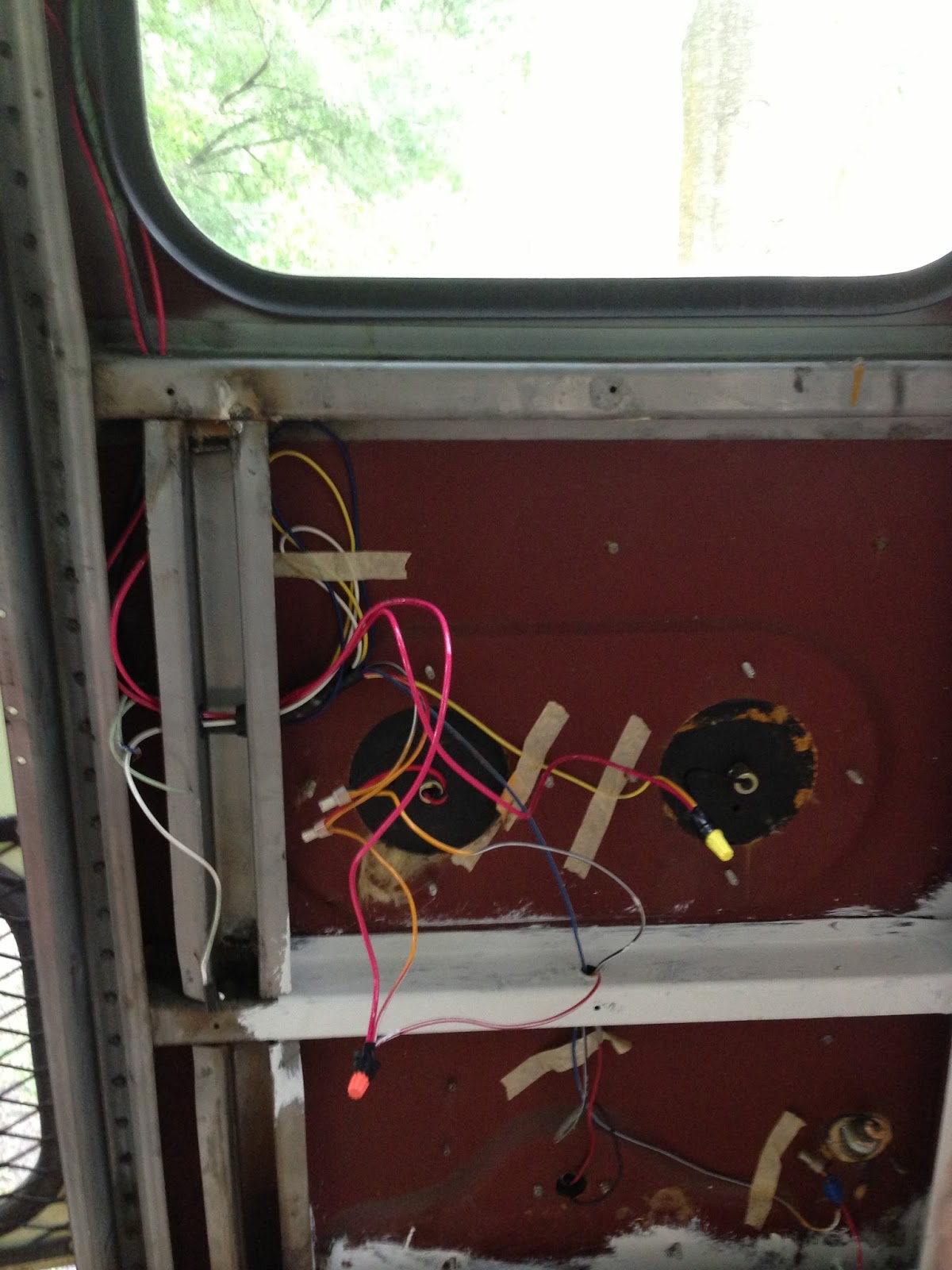 We also made a big purchase this weekend! It came in a big box and we drove over to the West Marine store in Tarpon Springs to pick it up. 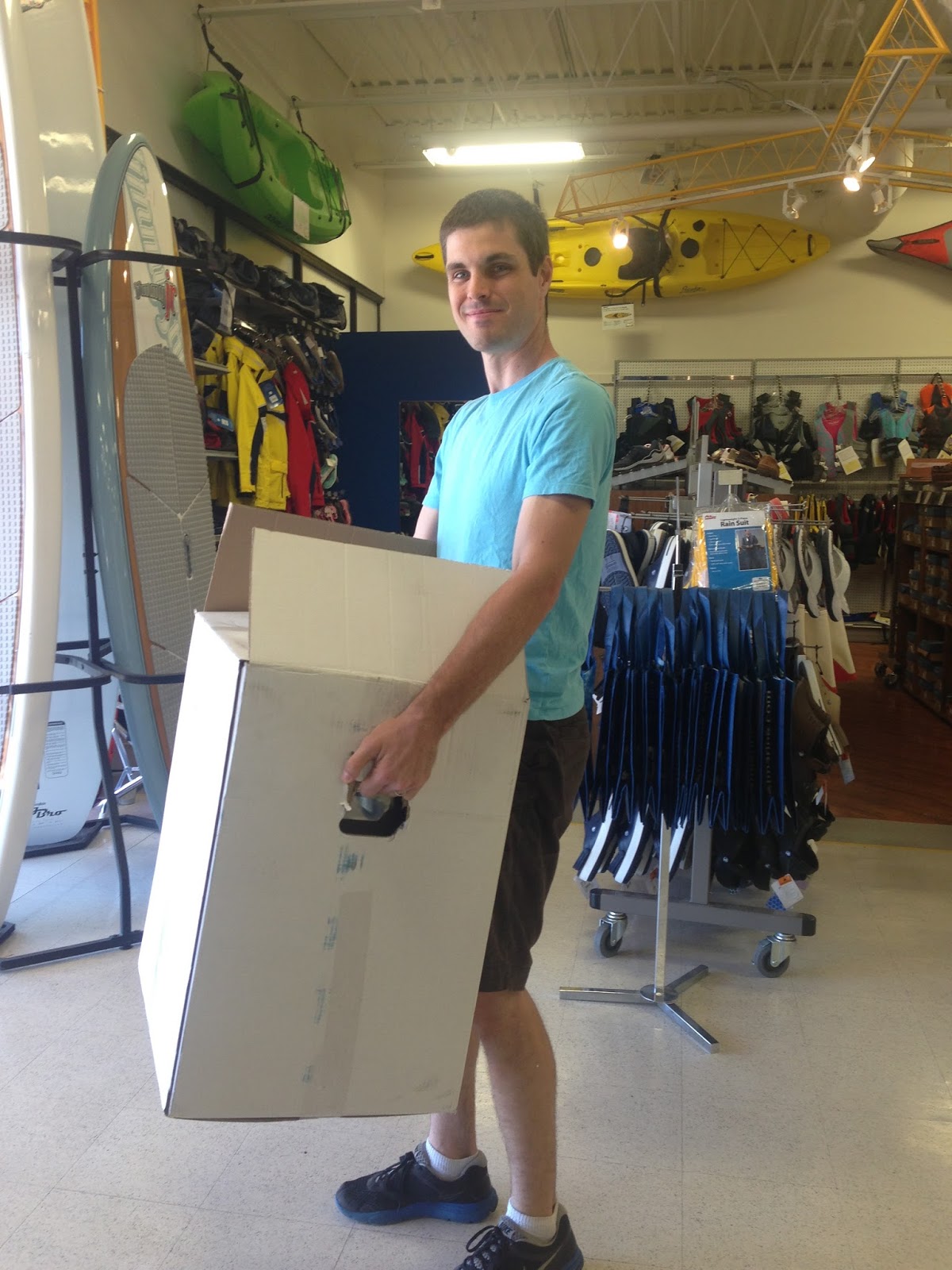 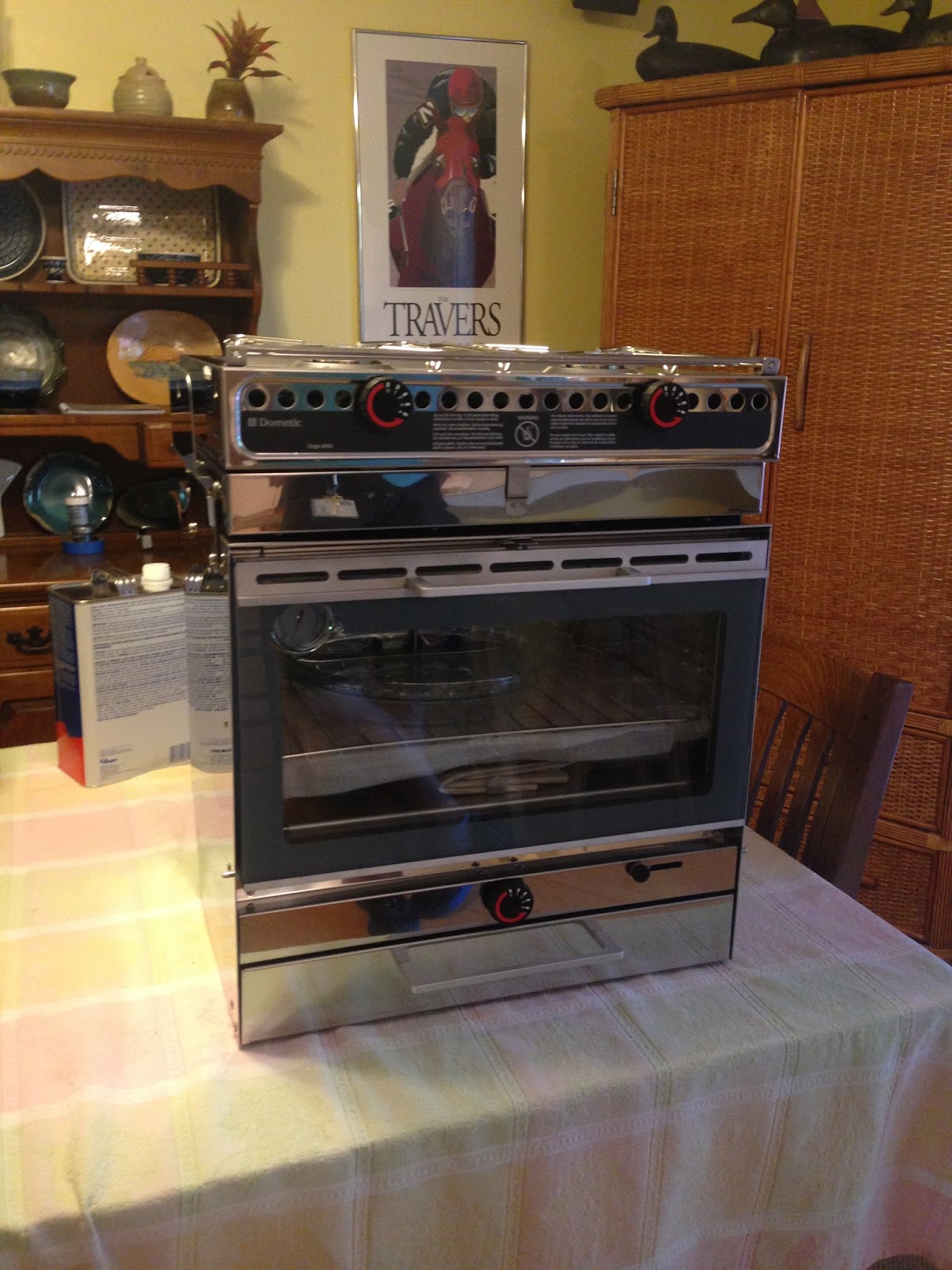 Just as there were many people wondering why we bought a bus instead of an RV, I'm sure many of you are wondering why we went with an alcohol stove instead of a propane or traditional electric one. An electric stove was out of the question from the get go. We're aiming for off-grid capability and will use a battery bank and solar array (eventually) to power all of our electrical needs. Appliances that create heat require the most electricity. Using all of our battery power to power our stove was counter intuitive.

Chris was against propane from the start of this project. Despite it being used safely in thousands of households, there are risks and potential complications of plumbing a combustible and potentially explosive gas into a small living space. We hope to travel regularly in our home, so the added concern of leaks after bumpy travel or shifting terrane was a big concern. Also, although there are plenty of safe propane detectors out there, if a leak occurred when we weren't home, our dogs would be at risk of harm and that was unacceptable to us. 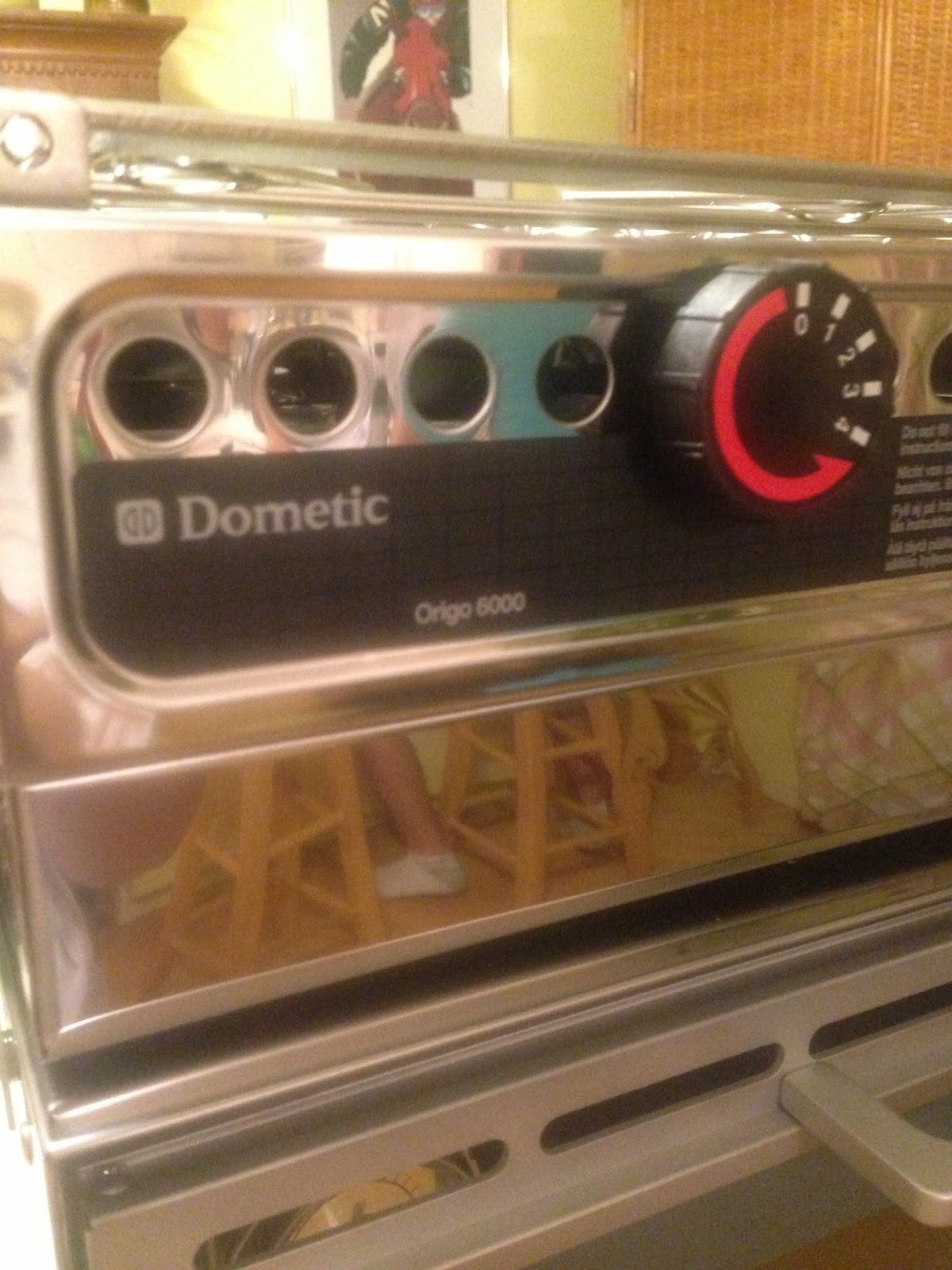 So we settled on a non-pressurized alcohol stove and oven. These types of stoves are frequently used in boats. They're hardy, simple, and easy to use and fix. Alcohol is not explosive and it's actually the vapor that is flammable. You can have a whole glass of alcohol and light it on fire but only the very top will have a flame and the bottom will remain relatively cool.

When you lift the lid of the stove you can see the two fuel tanks held inside. Inside the fuel tanks is a white fabric type thing that absorbs the alcohol and releases the flammable vapor.

The black circle you see on the left fuel tank below is a rubber gasket that seals in the alcohol into the tanks when they're not in use. The stove is started easily with a lighter and turned off by turning the knob to zero. This slides a metal flange over top of the flame and puts out the flame. 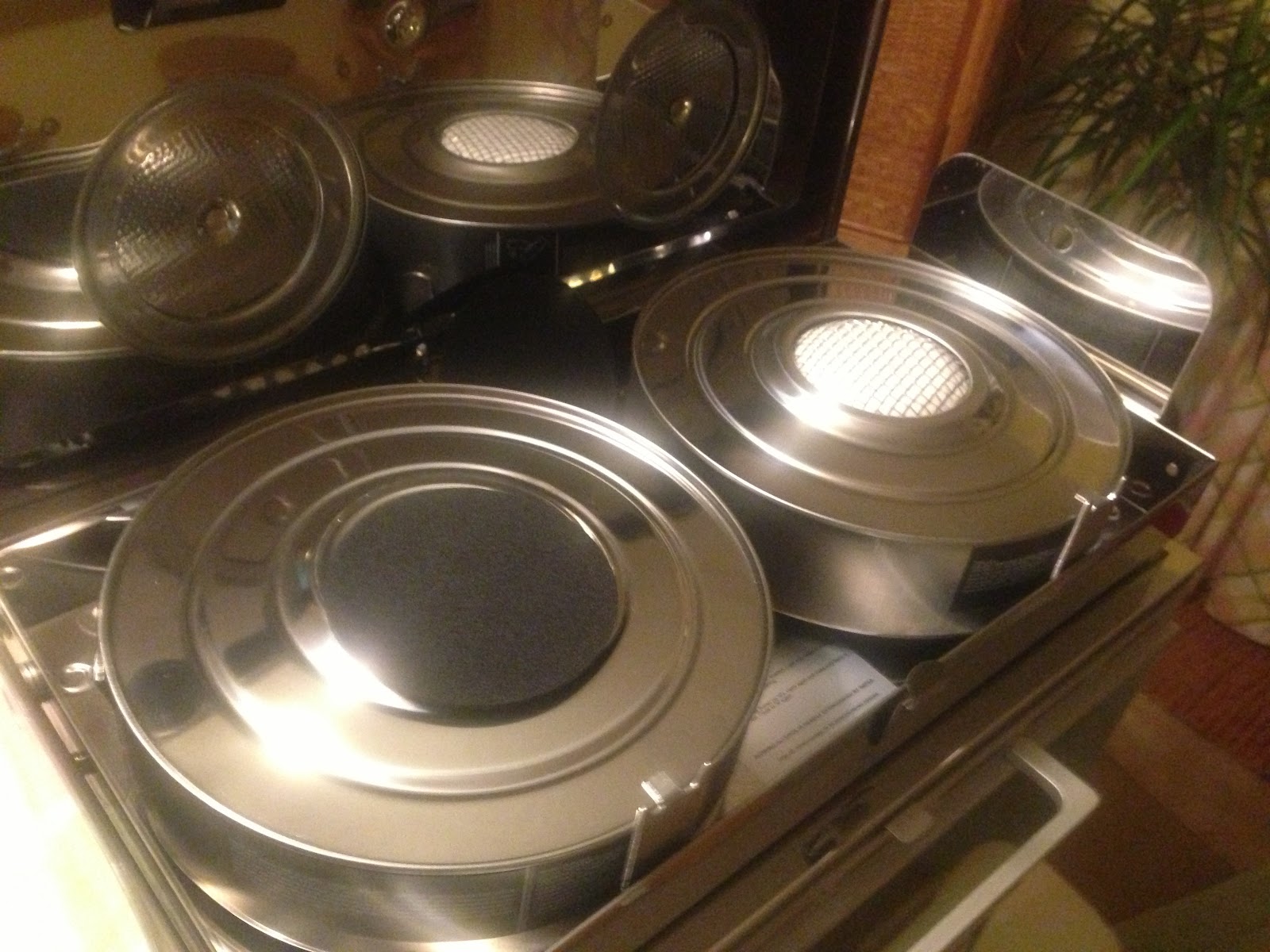 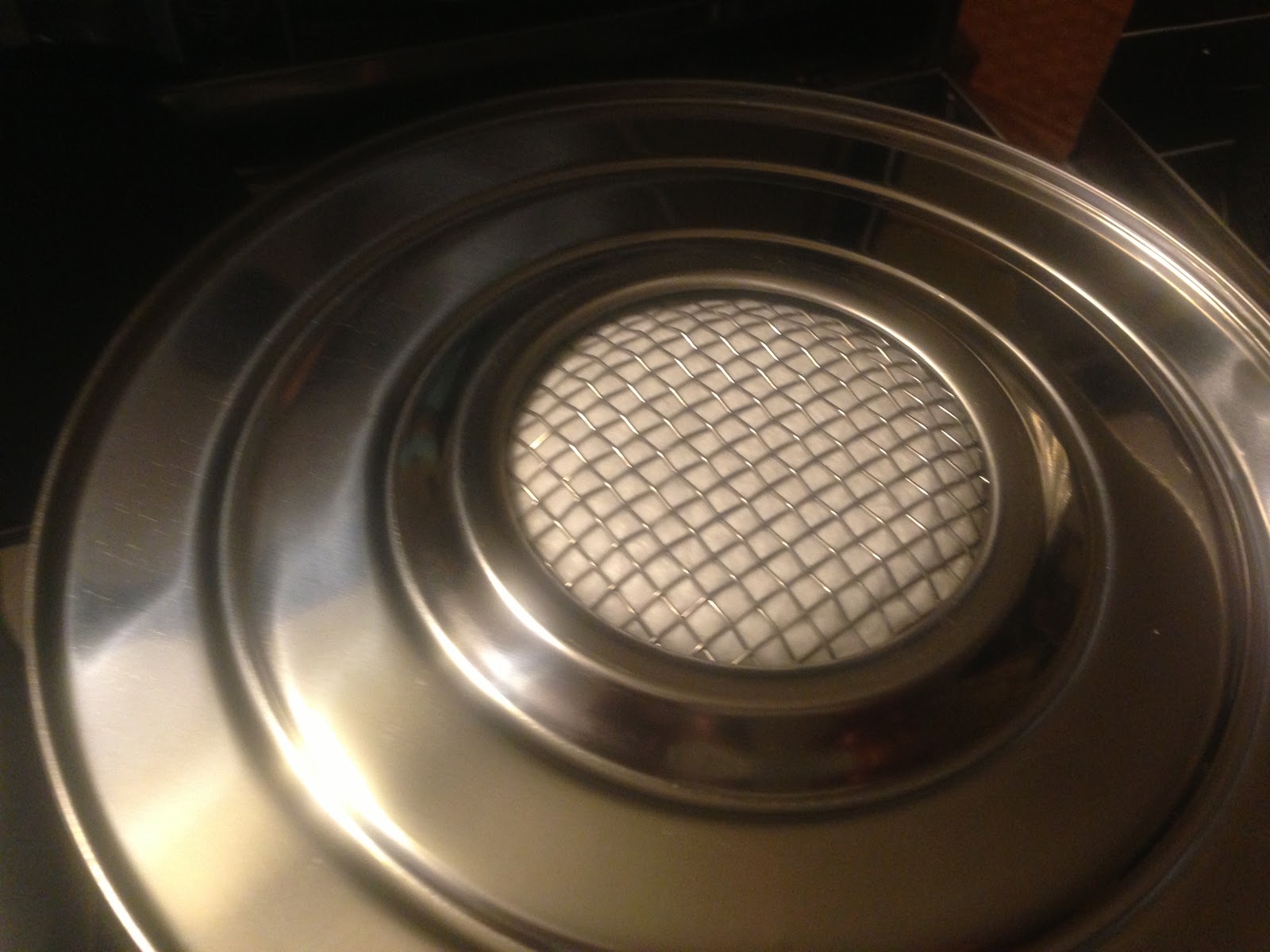 There's an additional fuel tank underneath the oven and it works the same way as the stove. I intend to create a ceramic disc in my pottery class to help distribute and maintain a constant heat evenly in the oven. I read several reviews of people doing this and they said it works very well. 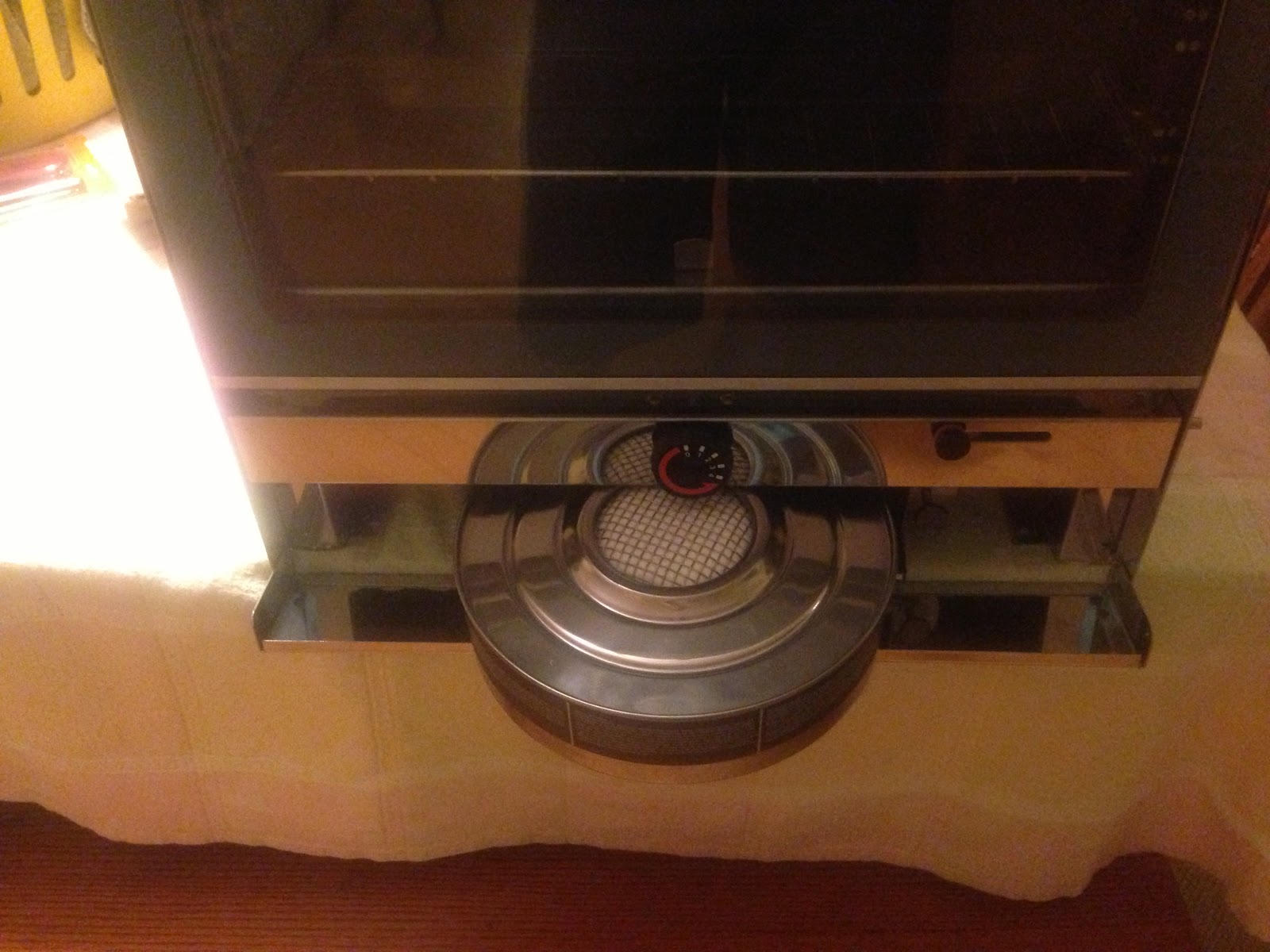 I won't lie, I was a little hesitant about the alcohol stove at first. I love cooking and we eat a majority of our meals at home. The proposition of a cooking device that was anything other than what I was used to was a bit scary. After doing a pro-con list comparing alcohol to propane, I was comfortable with the alcohol stove with 1 important requirement. I'm the official pie baker in my family and people rely on me for these baked vessels of goodness, so I wanted to ensure that I could keep this position. The first thing I did when we took the stove out of the box was pop in my trusty pie dish and voila! It fits!

On our way back from Tarpon Springs we stopped by another construction site and picked up some more lumber (with permission) that was tossed in the dumpster. 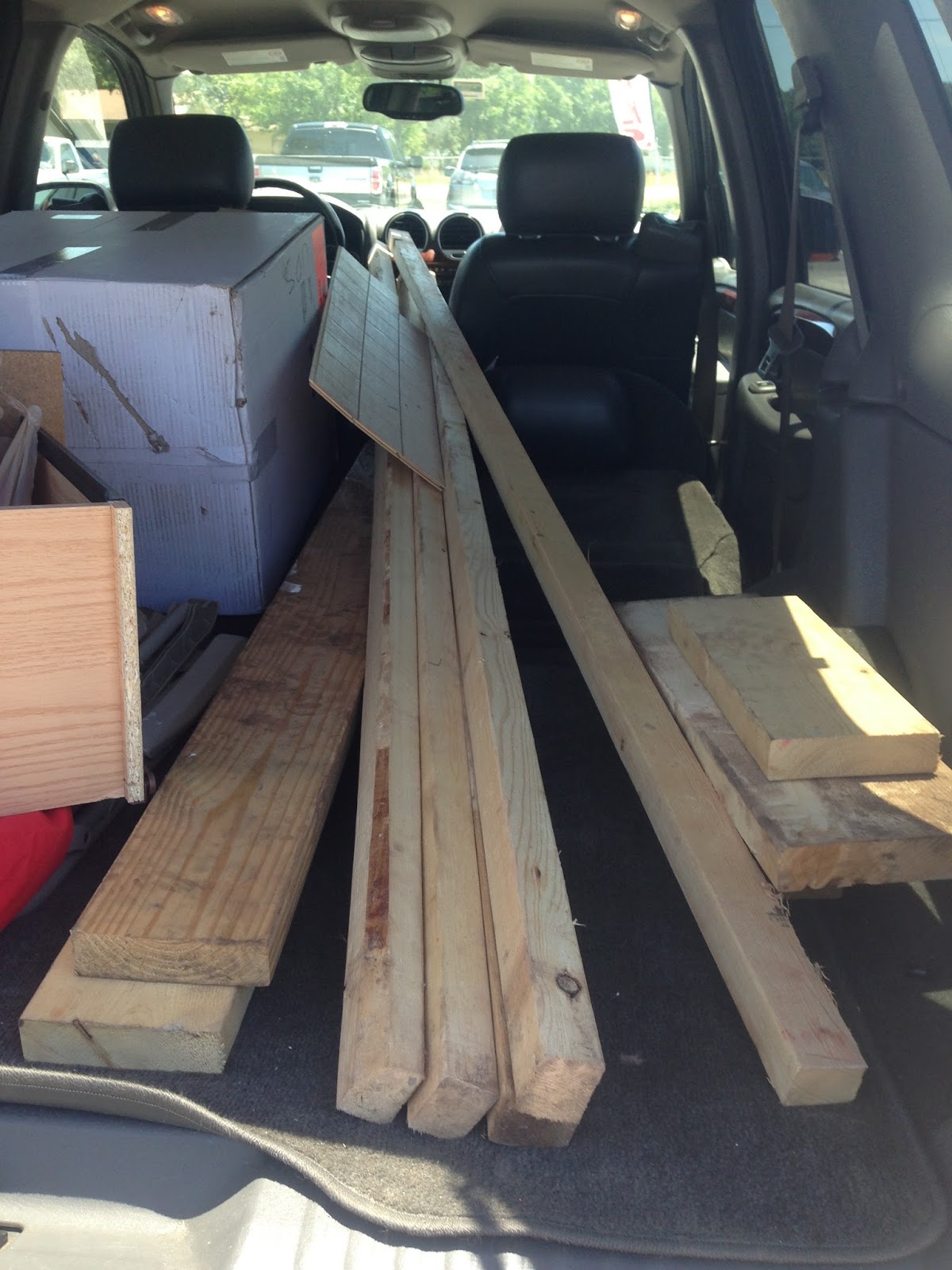 To legally be considered a Motor Home you must meet at least 3 of 6  DMV requirements. Now that we have a way to cook (our alcohol stove), electricity (even if it is an extension cord from my parents back porch) and a place to sleep (it may just be a hard old box spring that we plan on throwing away, but Winston and Willow sleep on it regularly) we're official!


We accomplished some other things since my last post but they're still in development. I'll post another update later this week with what's going on inside the bus.
Posted by Unknown at 11:11 PM