This week we took a field trip to Home Depot to stock up on lumber for building the rest of our walls and to start building the kitchen counters. The Envoy SUV we typically use for these trips was out of commission so we decided to just take the bus. This turned out to work great as there's a long empty parking lot along the side of Home Depot which was easy to park and turn around in. Chris encouraged me to do some of the driving since he typically drives and I don't have as much experience. I'm happy to report the drive was uneventful and I'm a natural bus driver.

We began the week with virtually nothing done on the passenger side of the bus. We started by sealing up the two windows over the wheel well with insulation and plywood. 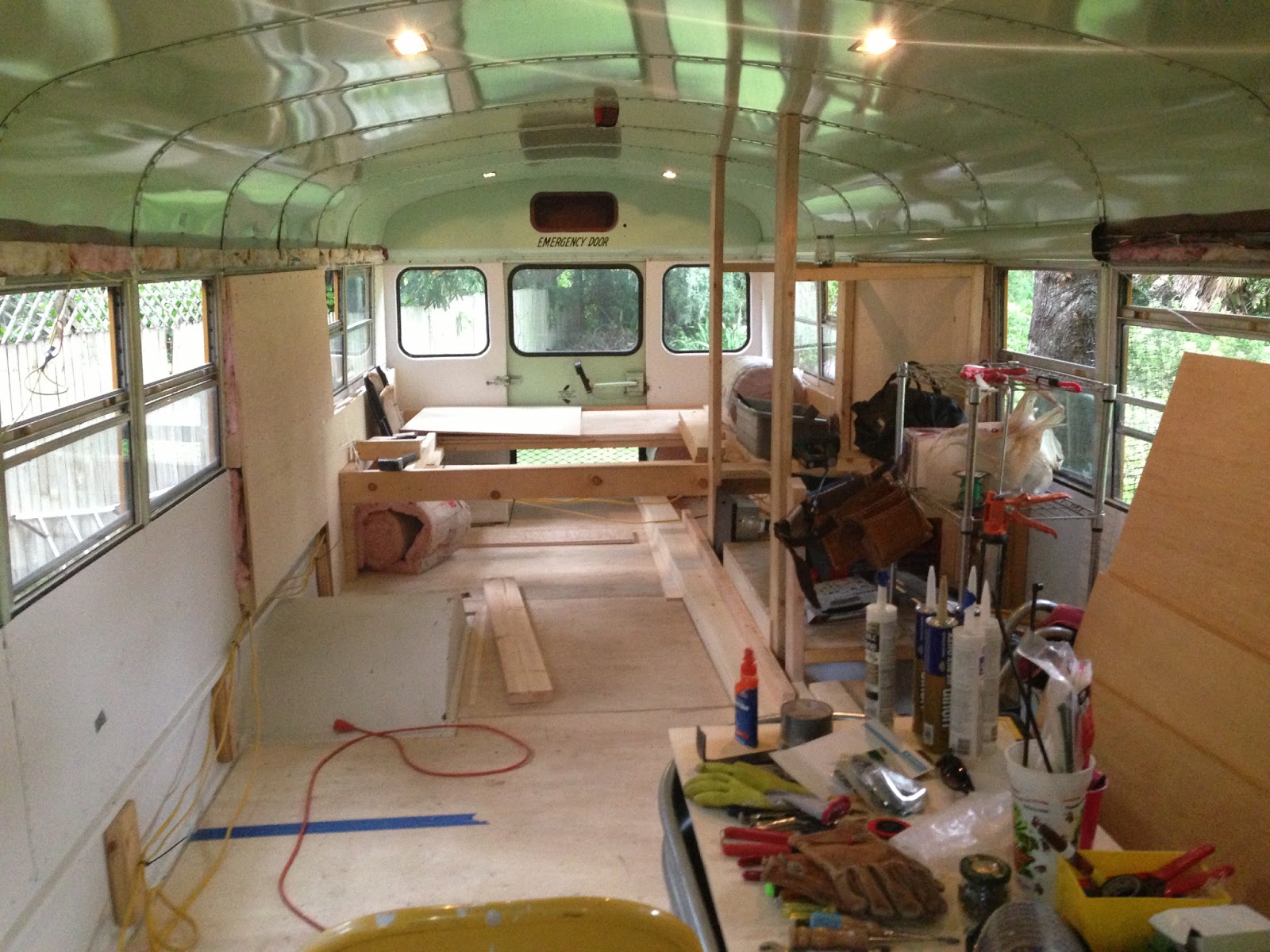 We then began framing out the closet walls. The difference on this side from the drivers side is that we needed to accommodate a wider forward closer wall as it would also be a shared wall with the bath room, which with my mom's help have nicknamed the "privy" (since it does not contain any sort of "bath") 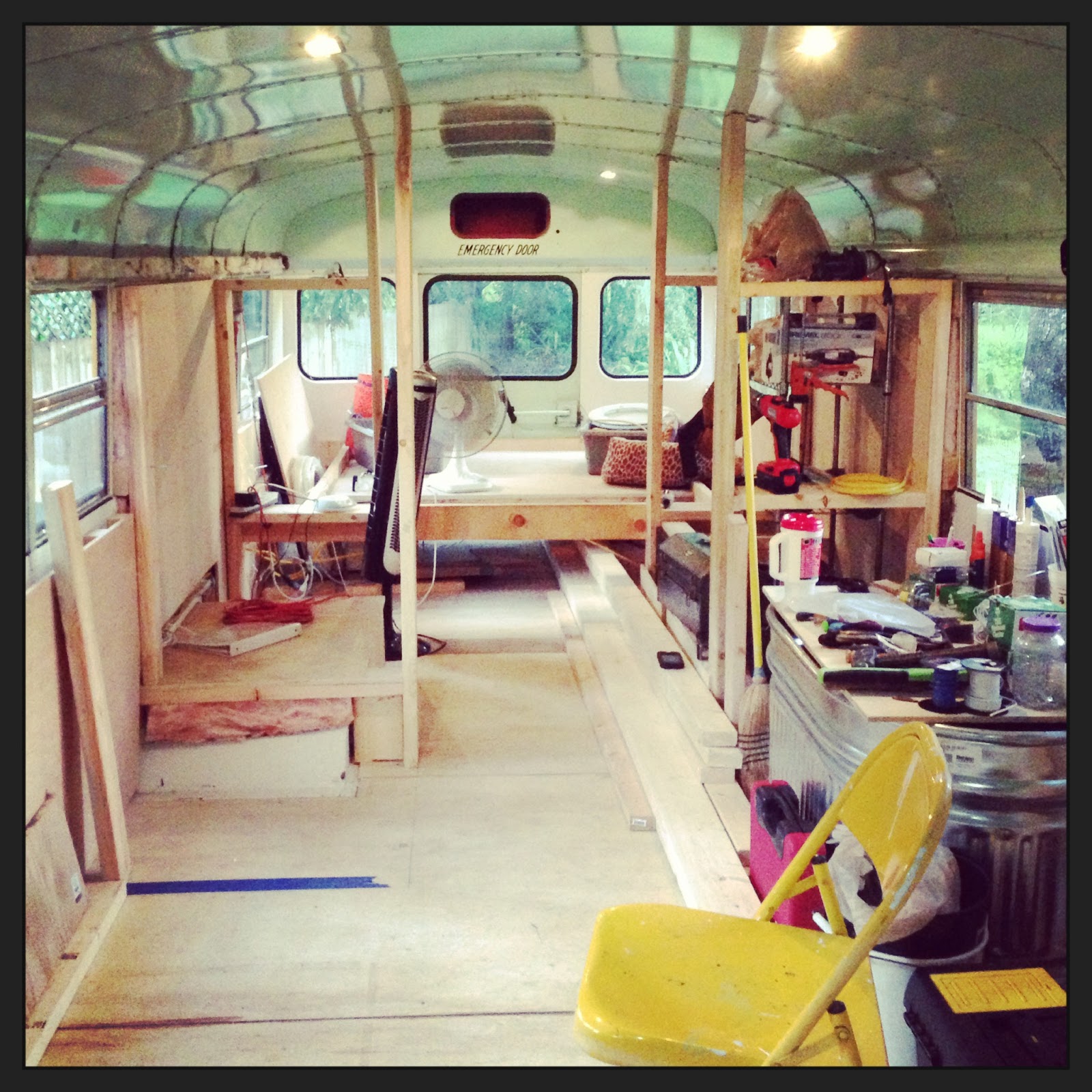 We left the privy window as is but sealed up the next one as it will be behind the fridge.

We then built the final floor to ceiling wall in the bus, the second wall of the Privy. We cut a hole in the stud and wall behind it so that the fridge outlet could be located inside the walled area.

As we continued to work on the privy walls, we began visualizing the kitchen makeup, taking into account plumbing and electrical. This was our attempt at a counter mockup to get a grasp of the height and depth (not length) of the counter space. 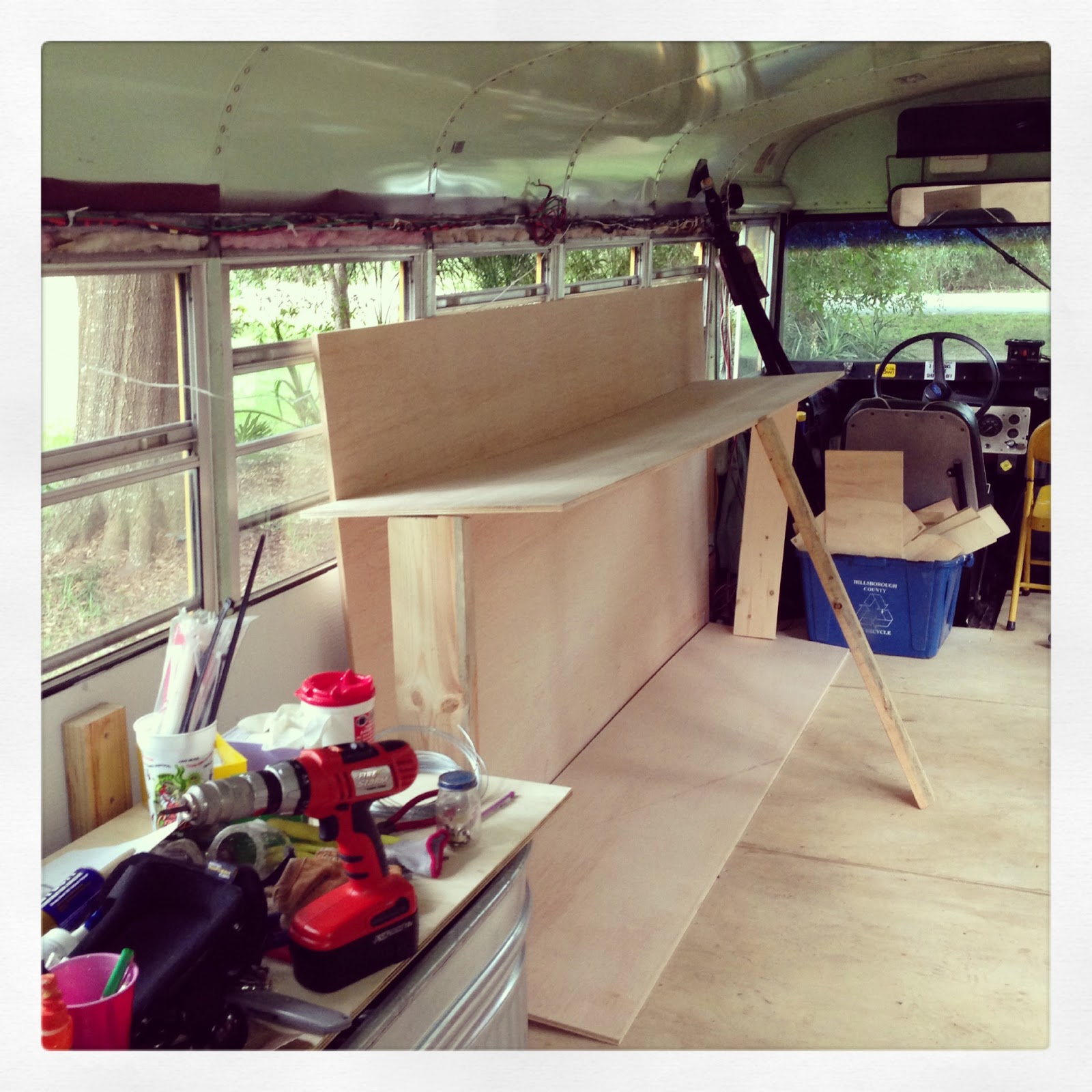 There have been thunder storms nearly every day for the last couple of weeks. We're very fortunate that despite the heavy rains, we're able to keep working on the bus since it's been weather proof since day one. A lot of our tiny house peers don't have this luxury until they reach the dry stage of their builds and we're very grateful to not have to go through that. Though working in a hot, muggy bus in 95* weather during a rain storm with the windows closed is hardly a pleasure. We're very excited for the AC which is set to arrive sometime in the next week.

While on one of our many trips to the hardware store we picked up a small can of metal paint called "harbor blue" and I slapped some of it on the bus to see what it might look like. We like blue, and we like the price of this blue, though we aren't 100% sold on the color. Painting is going to be one of the last steps of the build so there's no hurry, but it was exciting to imagine what the bus will look like when it's all done. 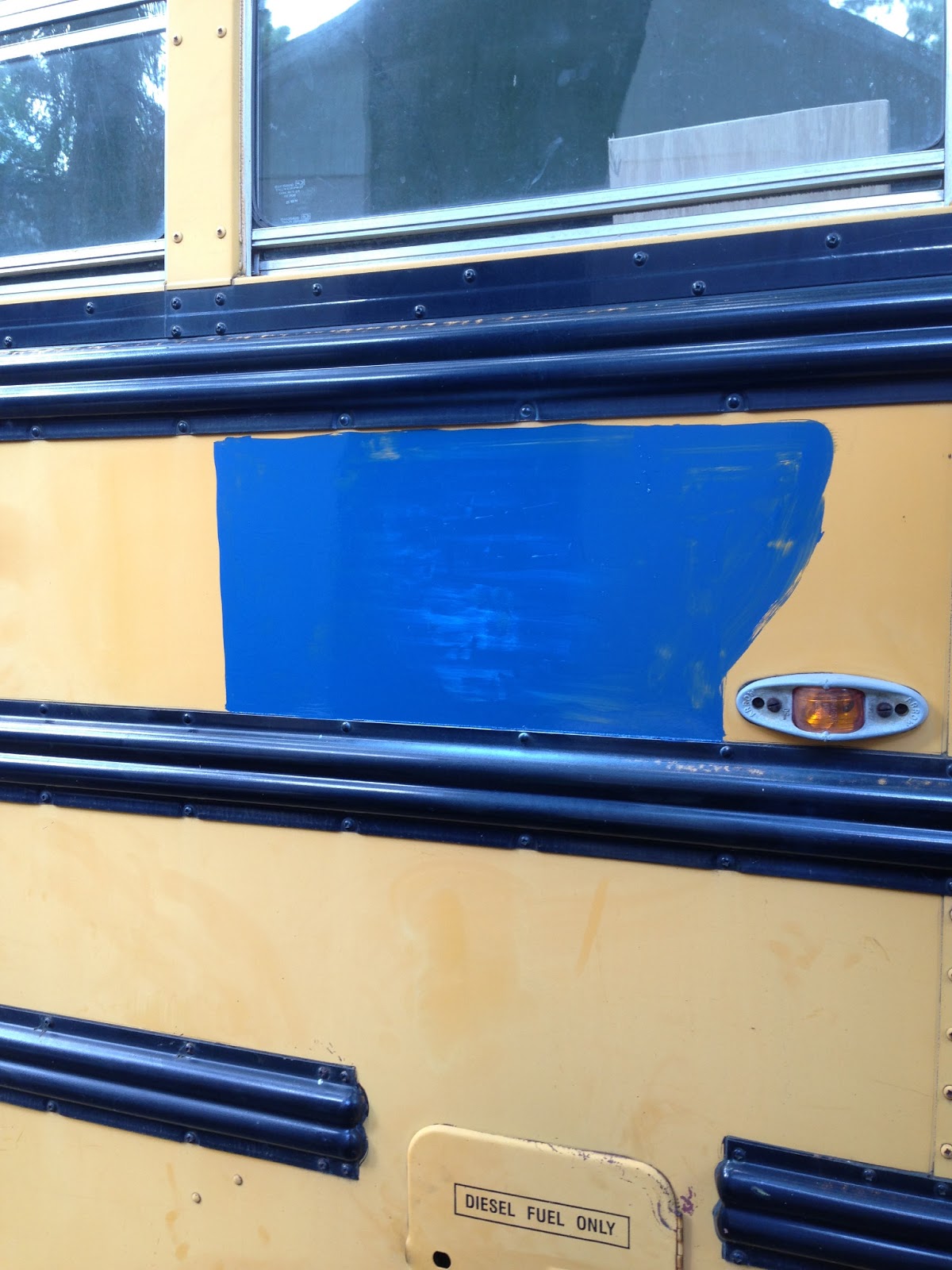 We've been visiting our electrician twice a week for the last 3 weeks and we're happy to report all of the wiring within the bus is completed and hooked up to our circuit breaker/converter box and inverter. Next he will instal the external input plug for shore power as well as the internal outlets and the batteries.

The circuit breaker box/converter and our inverter have built in fans but we added a vent to the side of the electrical box for added circulation. This, along with all of the equipment being located near the AC will hopefully keep the air moving and the area cool. We will build a lid for this box once Kevin has put in the plug to the outside and cleaned up the rest of the wiring.
Earlier this week we decided on a floor plan change up! I quickly drafted it up in floorplanner so please excuse the fact that the dimensions and proportions are inaccurate. However you get the gist. We will now have a "classic kitchen triangle" as one of our Facebook followers penned it. The kitchen will be split with a fridge and stove on one side and sink on the other. We'll also have a fold down counter over the tub for additional counter space. We've decided to switch up our sink for a larger one and picked out the counter top we think will be "Just Right" from Ikea, which we will pick up this week!

This new floor plan will also allow our guests to face each other to chat with a split 4' section of couch on either side of the bus. Although this eliminates our twin bed couch idea, I decided that any guests that would like to sleep over would be just as comfy on the wood floor with the couch cushions as they'd be on the wood couch with the couch cushions. Plus this is a bus designed to be just right for us, not just right for everyone so some sacrifices will have to be made.

After we picked out the counter top, we did a slight redesign of our hamper. I wanted the fold down counter over the tub to line up with the top of the hamper and the top of the sink counter so we had to raise up the height of the hamper some. There will be a faceplate put on this to seal it in and then concrete board and tile on the current plywood face to help protect it from moisture of the tub. We've ordered our tub faucet and are waiting for it to arrive (ETA on Tuesday) before proceeding with the plumbing. 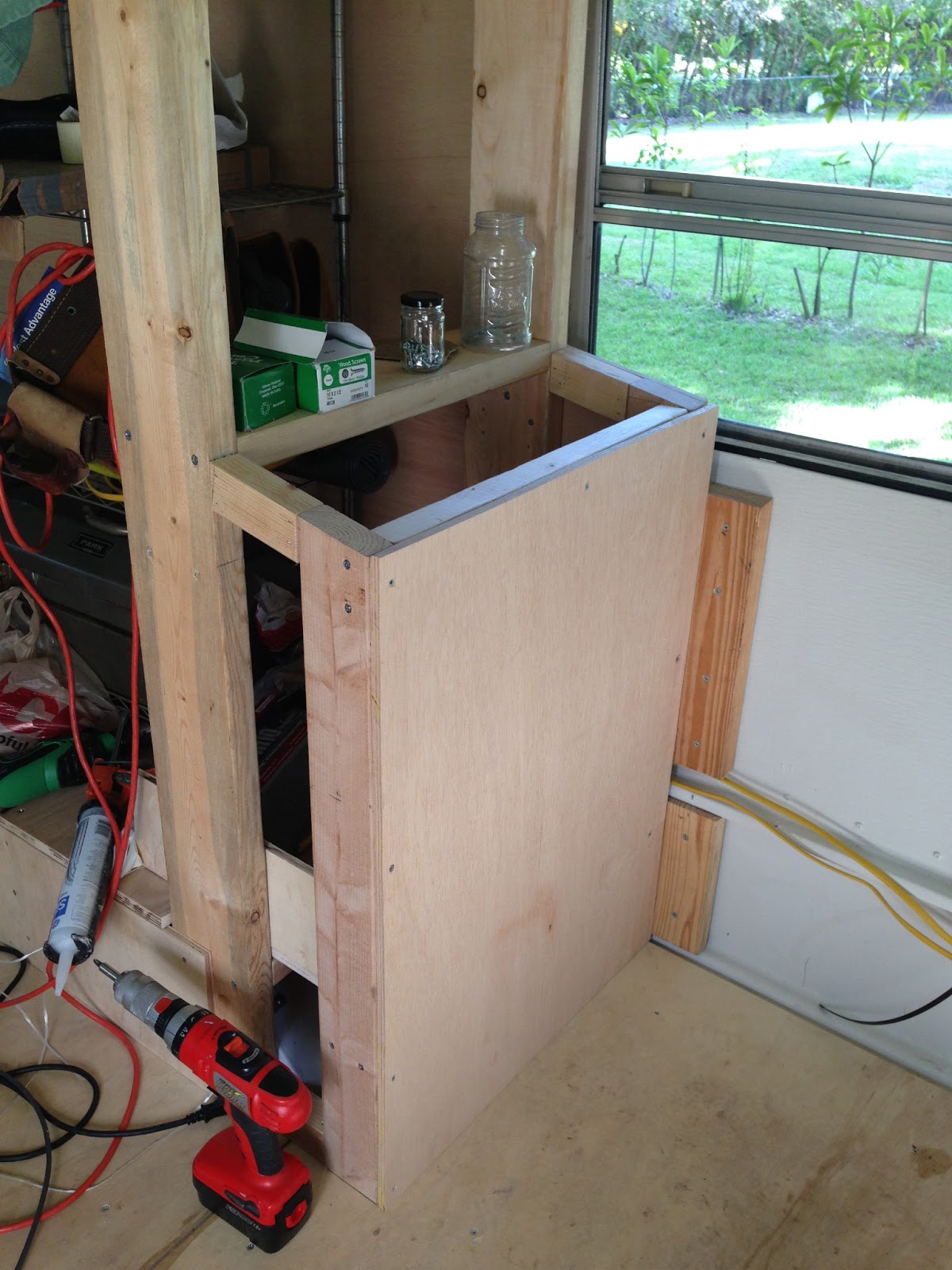 On Friday we drove 2 hours to Lake Wales to pick up our water tank. It's a 69 gallon tank that we had custom made to fit the middle area under our bed. This will allow storage in drawers toward the front of the bus and "garage" storage under the bed accessible from the back door. We'll store our tools and such in the "garage". 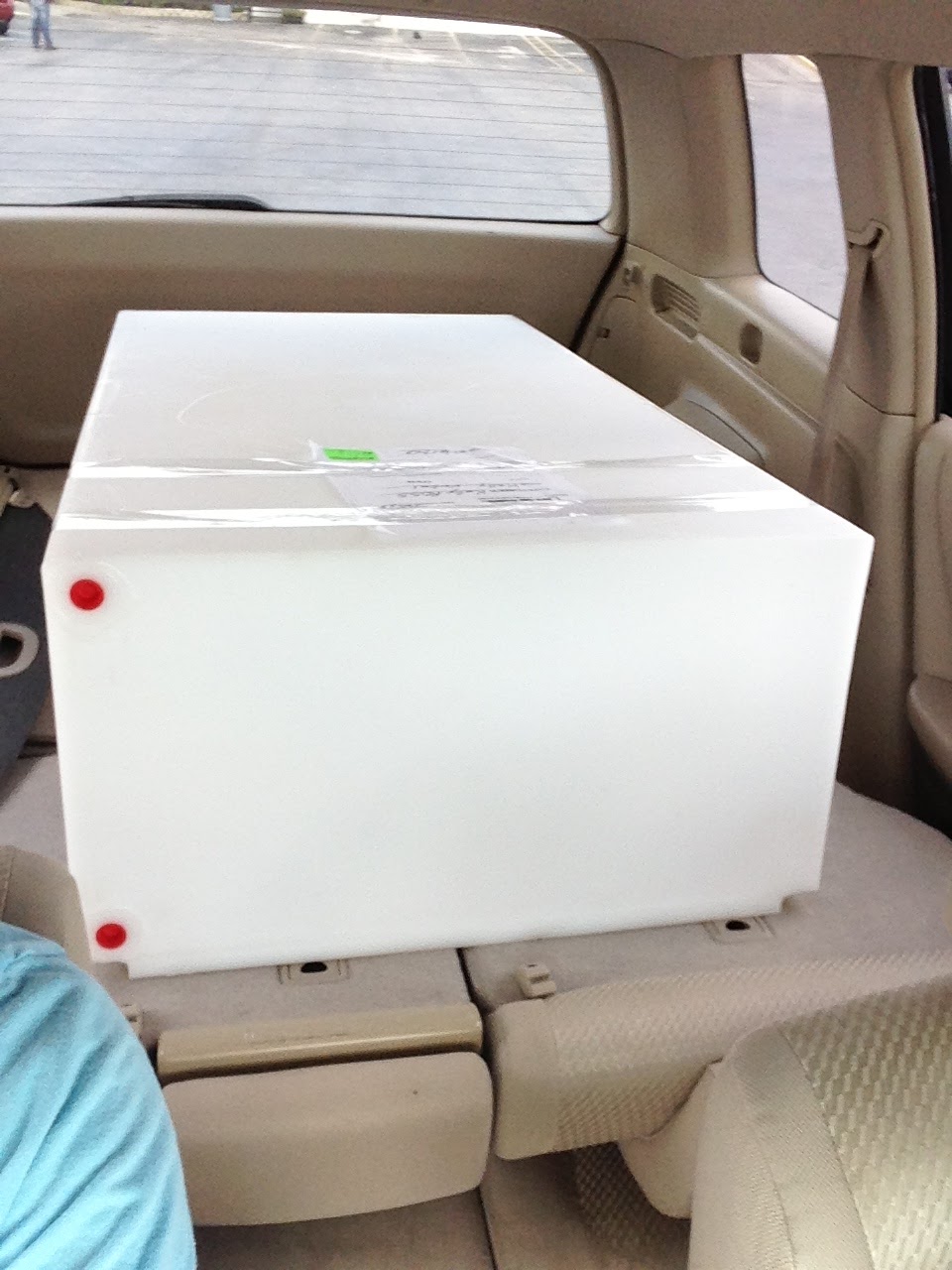 Today, after a ridiculous amount of time planning for our tub, counters and couches, we splurged and bought our new refrigerator. It's a 10 cubic foot Vissani from Home Depot. I wouldn't wish a trip to Home Dept the day before father's day on even my worst enemies. I managed to convince Chris that a trip to Ikea afterwards was a very bad idea. With help from dad, we managed to get it into the bus (through the back door) and out of the box without a scratch or dent. 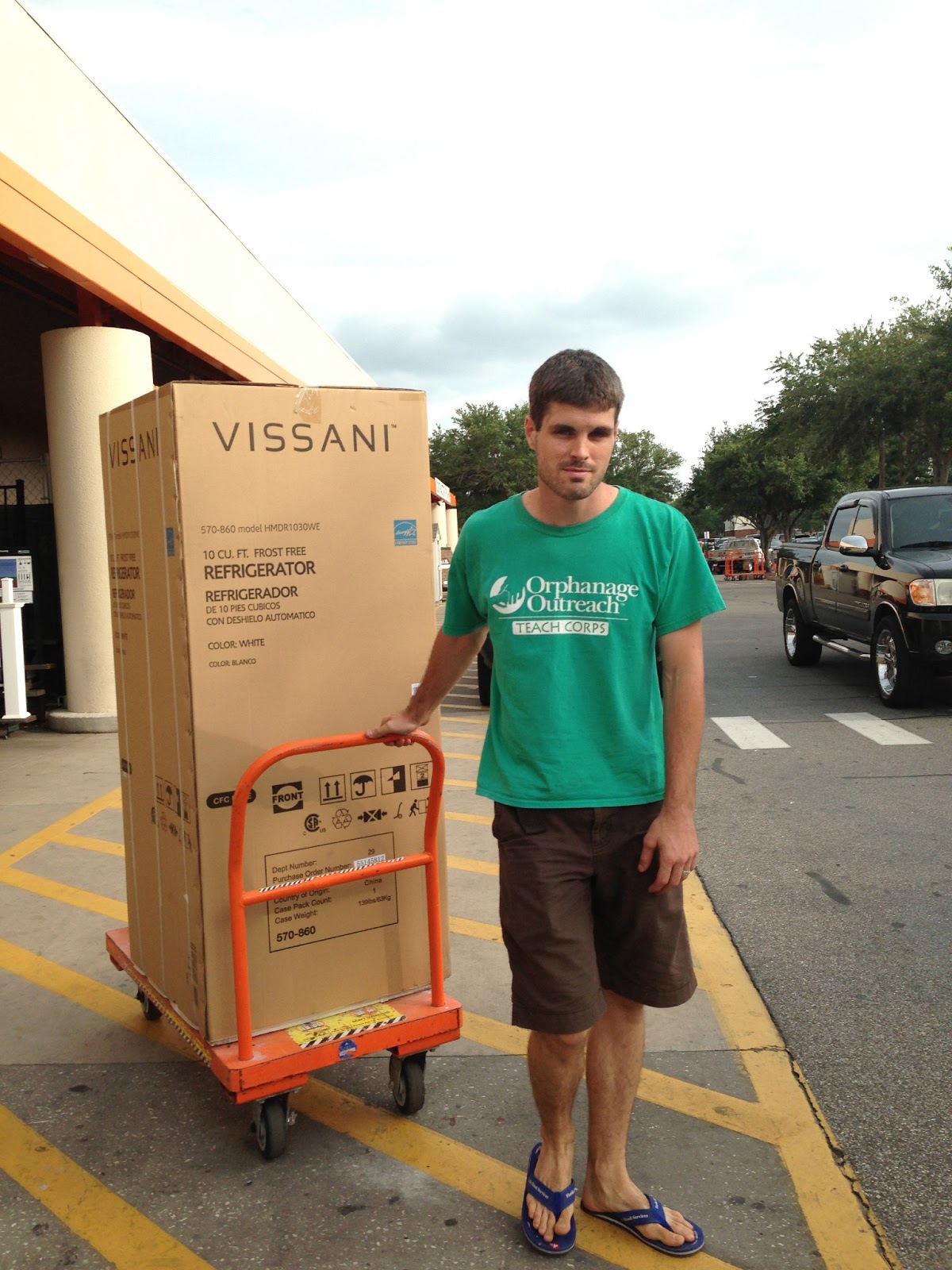 So we have a fridge, a bed and a tub! With an extension cord and a hose our bus is quite liveable. Though, an air conditioner will really make or break the decision to sleep in it. The ETA for the mini split was today so we're on the edge of our seat, hoping it will arrive soon. This week begins our adventure into the word of kitchen cupboards and plumbing, so stay tuned!